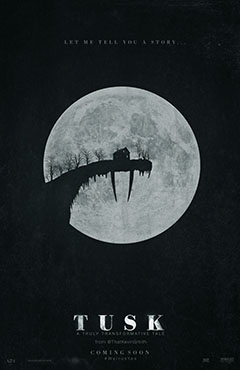 I’m the least likely person to one- watch a movie starring Justin Long or Genesis Rodriguez (though she’s popped up quite a bit in my movie-watching recently), and two- show any serious interest in a Kevin Smith movie. Though I do have a girly soft spot for Jersey Girl and I was reminded of Raquel Castro when I saw Madhuri Dixit’s childhood photos.

Tusk had a bit of a bizarre start up on a random podcast between Smith and producer Scott Mosier, where they talked about a weird ad where a homeowner offered free lodging if the lodger would agree to dress up as a walrus. After a Twitter vote on whether or not they should make a movie out of it, the way all movies should get off the ground, the production of the film was set into motion.

Long and Haley Joel Osment (making his proper-proper reintroduction to movies after Sassy Pants) play Wallace and Teddy, your average dudes podcasters on the hunt of their next story- they’re looking for an interview of a kid internet-famous for chopping his own leg with a samurai sword. HILARIOUS~ so Wallace sets off to Manitoba (that’s Canada, FYI) to meet him against the desires of his girlfriend Ally Leon (Rodriguez — El Puma’s daughter, get it? Big Cats). Nothing goes according to plan, so Wallace ends up meeting Mr. Howe (Parks), who had posted an ad offering free lodging and fantastic stories to tell to travelers.

Except the ad forgot to mention that Mr. Howe is a crazy mother-effer with a walrus fetish and Wallace is in trouble. There’s also Johnny Depp as Guy Lapointe, who’s supposed to have a French Canadian accent, but no-

If you take this with a grain of salt, Tusk turns out to be immensely hilarious and… quite enjoyable, even if tremendously twisted, if I may say. It helps that I don’t like Justin Long, who happens to suffer throughout most of the film under the sick machinations of Michael Parks, who steals the show like Smith set out to do. I don’t want to say he’s charming, but he definitely showed a certain endearing warmth when he recounted his backstory while physically and psychologically torturing a pleading Wallace.

Of course, it also helps that I didn’t know anything else about the movie, so what actually happens with the walrus came like a surprise to me. But I gotta admit, I couldn’t keep my eyes off of it. It’s got a meaty second act, while the beginning is probably the weakest. You really have to pull through the congratulatory white dude vibe to meet Mr. Howe, the rest will flow. I don’t see regular spook horror movie fans liking it, though, explaining the dismal IMDb rating. It’s got little spooks, just a tiny bit of gore, and loads of WTF psychological sh!t moments.