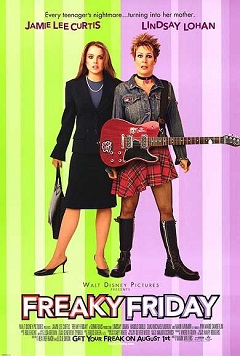 To be honest, I actually had another thing in mind for my 300th post. However, a dinner night at a restaurant led me into catching a brief glimpse of Disney’s second remake of Freaky Friday. A girl, who was slightly older than me, grabbed the remote control and flipped channels and stuck with Disney Channel airing this. Somehow, she enthusiastically sang Take Me Away [MV] which not only made me laugh (in terms of the girl singing and the song’s irony value considering Lindsay Lohan’s life for the last 6 years) and smile briefly, but I ended up revisiting the film yesterday — and I really needed to wash the bad sight of 3MSC anyhow (as horrid as it is to admit watching that recently).

The 2003 adaptation of Mary Rodgers’ novel shows Tess Coleman (Lee Curtis) and her Avril Lavigne-esque daughter Anna (Lohan) constantly hating their guts to death because they’re different people with different priorities that do not get along very well. The film’s title comes into play when Tess and Anne wake up on a Friday morning with their bodies changed. How did this happen? The night before, the body swapping is imposed upon them by a Chinese restaurant owner (Rosalind Chao) who witnesses their bickering (which had reached a boiling point), deciding to teach them a lesson via fortune cookies that they each read aloud, a spell that will not be broken until they each learn a lesson in unselfishness.

Obviously, both want to return back to their original bodies since both have big things at stake. Anna has a high school crush on Jake (Murray), and her rock band Pinkslip has gotten a big chance to showcase their talents at House of Blues. In Tess’ case, however, the stakes are much higher given that Tess is about to enter a second marriage with Ryan (Harmon), and this is scheduled to happen very soon.

Cheesy setup and previously used gimmick aside, Freaky Friday is actually fun to watch in large part to both female leads and the body-swapping, which puts Tess and Anna on different shoes and allows us to see what a strict adult would do in the body of an edgy teenager, and vice versa. While Lindsay Lohan fares quite well as the straight woman role through Anna and LohanTess, it’s Jamie Lee Curtis who has the slightly tougher role -actually stealing the show- as both Tess and CurtisAnna, especially when it comes to several comedy spots and a highly important speech near the end of the film. It’s clear that both actresses had fun playing them, but Lee Curtis’ performance is really awesome.

One of the things that prevents me from fully recommending Freaky Friday has to do with some of the awkward bits featuring Murray as Jake wasn’t able to shake off some of the cheesy aspects of his character and dialog whenever he interacted with Tess or Anna, regardless of body host. Another bit involves the film’s choices of songs (it’s a hit and miss thing), especially the outro song which clashes against Pinkslip’s style. However, the fortune cookie issue really makes me ask the following question: why should a stranger interfere in business that shouldn’t concern them at all? That very thing allowed most of the fun to be displayed and lessons/experiences are learned, but that question pops up by the end of the film with an overkill sensation.