The Fangirly Diary of a Geek Girl: We be trolling~

Greetings, my fellow geeks! The New York Comic-Con (NYCC) started this week, but most importantly Robert Downey Jr. and J.K. Rowling has been playing with our feels. Here’s how the week started:

As usual, here’s the weekly Doctor Who promo! “Kill The Moon” failed so hard at the science part of sci-fi, but I did like the episode even if the message was a bit of a mess. And this week we have “Mummy On The Orient Express”! I like the aesthetics of it already~

So, Ben Affleck has been doing the rounds promoting Gone Girl, but of course there are the usual questions about Batman v Superman: Dawn of Justice and his regrets on his other stint as a superhero in Daredevil~

Indeed I have regrets about Daredevil. I have regrets about all the movies that I don’t think were executed properly. … Look, if I thought we were remaking Daredevil, I’d be out there picketing myself … and that goes for other movies as well that I haven’t been happy with. You know, I’m hard on myself and I have exacting standards and I want to do excellent work and I don’t always succeed, but I think you have to start out with that drive.

He also had nice things to say about Zack Snyder, specially about Snyder’s energy levels~

Zack has more energy than anybody I know. He works as hard as anybody. He’s in the gym in the morning and storyboards every single shot, which is a huge amount of work. So everybody knows what’s going on. He’s got enormous visual talent. I stand there and he sets up shots. We do the blocking and…I see a shot from Zack and I think, I never would have thought of that. He is so visually inventive so that’s quite pleasant. Action movies take a lot of days and involve a lot of stunts and visual effects—that combination and the story has its own challenges but I’m enjoying it. What I’ve learned from Zack in the movie are the cutting-edge visual effects—what we’re able to do now and how you integrate that into a story. He’s very gifted.

On the Marvel side of things, Simon Kinberg says Deadpool is totally part of the X-Men cinematic universe. B-but this Deadpool ain’t the same as that awful thing that took his name in X-Men Origins: Wolverine, right? I think we all agreed that (and X-Men: The Last Stand) never happened, right?

There’s definitely a sort of overall plan that we’ve all been talking about for the X-Men universe now, and Deadpool obviously fits into that. So yeah, I guess I would say it’s part of certainly an overall timeline and thought process that goes into these films, some of which is inspired by the comics and some which is inspired by seeing what Marvel’s done with telling a larger tapestry and linking all those movies together, even as they stand independently as well. The same kind of thought is going to go into these X-Men movies at Fox.

Yay! More clips from Avengers Assemble Season 2! This one is from the second episode and features Thanos! He is giving the heroes trouble and it’s not smiling nearly enough~

J.K. Rowling started her trolling early on. She started tweeting about apparently finishing the script of Fantastic Beasts and Where To Find Them. Apparently, because she ain’t mentioning the name, and she could theoretically be tweaking another script?

Martin Freeman keeps getting work! He’s been cast in a BBC2 drama about the trial of Nazi Adolf Eichmann called The Eichmann Show. He will play TV producer Milton Fruchtman. The drama will be the centerpiece of BBC’s special programme for the Holocaust Memorial Day on January 27

[Adolf Eichmann’s] trial was broadcast to 37 countries over four months and marked the first global TV event, shocking the world with its first-hand testimonies from survivors recounting the evils of the death camps. An estimated 80% of the German population watched at least one hour a week with some reported to have fainted when they saw it.

Penny Dreadful Season 2 has started its promo, with a video with a creepy voiceover but no actual footage, and a new cast image! 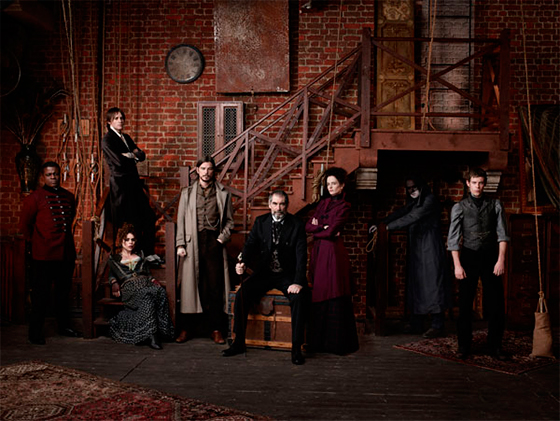 Simon Kinberg keeps talking about the shared X-Men universe, and the creation of a timeline that actually makes sense. But what about Fantastic Four, which also belongs to Fox? Will we ever see both Fantastic Four and X-Men as part of the same universe? Get ready for non-answers!