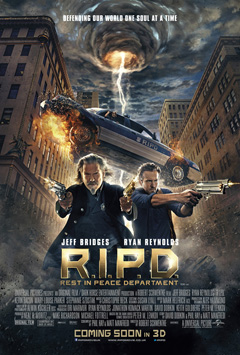 It’s no secret that everyone on this magazine hates Ryan Reynolds, and if anyone does like him or doesn’t mind him in movies- please, stand up! So how did I end up watching R.I.P.D.? I saw the trailer, I can’t even remember where, and I laughed. That’s the kind of floozy I am now.

The Men in Black franchise has its moments, so I thought this might be one of those watches. What’s it about? Good cop turned kinda bad Nick (Reynolds) is killed during an operation ‘gone wrong’ after he had badly hidden some odd pieces of gold. When he dies, time stops and Nick is taken to the R.I.P.D (Rest in Peace Department), which he is introduced to by Proctor (Parker) who dryly explains all about the afterlife and his would-be job as a cop capturing ‘Deados’ who escape the tunnel of the afterlife affecting the balance of our world.

As a member of the R.I.P.D, Nick would return to Earth — which would give him the chance to communicate with his now-widow Julia (Szostak) — but there’s a catch: they all return in the shape of a different person, an avatar. Alongside his R.I.P.D sarcastic unsocial partner Roy (Bridges), they will have to uncover the mystery and stop the end of the world.

While the world of the R.I.P.D is the most interesting aspect of the film, and Mary-Louise Parker is probably the best part of the whole thing, the rest of the movie can be summarized on that poster. Because of that, I am ashamed to admit that I had fun in the first half of the movie. A little too much fun; especially when I got to see James Hong as Nick’s avatar pointing a banana at a CGI Deado. Except for Reynolds; Bridges, Hong and Miller play their respective parts with the conviction required to pull off ridiculous scenes such us getting slammed by a bus or thrown against a window. I do wonder whether those jokes would’ve worked if the genders  and ages of the avatars were reversed, and we had a Caucasian old lady (as Nick’s avatar) and a sexy Asian man (as Roy’s avatar). Is a sexy Asian man pointing a gun banana as funny as an old Chinese man doing it? Is it as funny if he gets hit by the bus? Is it just funny if old people do it?

Though I did burst out laughing during R.I.P.D, which seems to be a quality in Schwentke’s action comedies (I laughed with Red as well), it completely looses that fun element in its third act focusing solely in saving the world against the big crazy bad guy that Kevin Bacon always is. If Bacon and Ben Kingsley were cast on the same movie, my head would be having a hard time figuring out who the bad guy is.

Also, Jeff Bridges wasn’t that bad. I liked his fixation with ankles.