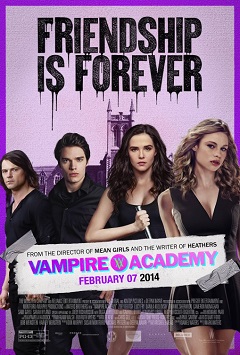 I’ll admit that I am definitely not part of the target audience [see: teenage girls] for Vampire Academy at all; the main reason I ended up watching this was because it was available on Netflix LA online, and I needed to rack up my 2014 film viewing. To my surprise, and considering the critical consensus, this wasn’t the worst film of the year for me. Unfortunately, it’s not without its share of flaws.

As far as the protagonists are concerned, Rose is a Dhampir and she protects Lissa, who happens to be one of the last living among the Moroi bloodline. However, an outing on the streets during one night leads them to be captured and sent back to boarding school St. Vladimir’s Academy, from which they escaped two years ago.

While SVA serves as a boarding school for Morois to learn magic, and Dhampirs learn how to protect the Moroi with their lives, Rose and Lucy rediscover a corrupt world within the Academy as well as its secrets, lies and more.

In theory, you could say that the pairing of the Water brothers to tackle the film adaptation of a book aimed at teenage girls seemed great considering their past works: Mark Waters directed Mean Girls while Daniel Waters wrote the screenplay for Heathers. However, the execution of the film wasn’t all that great to me. While Vampire Academy gets the inevitable comparison with the Twilight and Harry Potter franchises because there’s vampires and the main setting takes place in a magical school, I’m glad to say that this one isn’t a complete Twilight-esque borefest thanks to the nice bond between the lead characters, and a pretty good performance from Zoey Deutch as well as showcasing some good bits of sarcastic lines — some of them veering into pop culture territory — that got a few chuckles out of me.

Sadly, the screenplay made the film suffer a lot because there was a lot of things going on, which made the film heavy to watch on the eyes. Even worse, Vampire Academy fluctuated wildly between being interesting, tame and boring as the story unfolded, and certain characters held up the viewing while others didn’t, making it progressively worse. As far as the action scenes were concerned, they weren’t that good, but this wasn’t a film meant for quality action scenes. Acting-wise, Gabriel Byrne, Olga Kurylenko, Sarah Hyland and Joely Richardson stood out decently alongside Deutch, but the rest of the cast didn’t fare too well and poor Lucy Fry was trapped by her “damsel in distress” character. At times, I wished this wasn’t aimed for the YA crowd because the elements Vampire Academy displayed showed potential for a much better film: I would have loved seeing this heading into Cruel Intentions territory with some edge rather than seeing a CW-ish take on the vampire genre.

Then again, I’m not part of the target audience. However, it deserves an extra half-star for surpassing my expectations. It could have been so much worse.