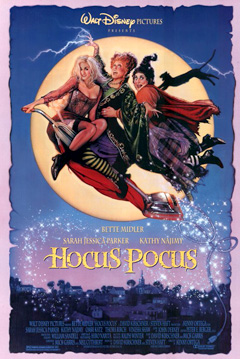 Disney’s summer blockluster is turning 20 years this year! Proving that movie critics generally know crap about movies. Why? They gave the movie a thumb down calling on Bette Midler’s “depressing as hell” performance through this “cheesy supernatural comedy.” 20 years later, Hocus Pocus is as funny as hell — trust’em, they’ve been there — and Midler shines through the bucktoothed ginger-head witch, Winifred.

As some of us were discussing not long ago, sometimes people have to live with the reviews we spew. Especially if we’re guiding ourselves on first impressions. And on first impressions, YES, Hocus Pocus IS indeed a cheesy supernatural comedy — what’s wrong with that? It’s the story of a teenage boy named Max (a post-Eerie Indiana Omri Katz) who revives the Sanderson sisters on the night of Halloween, then must save his little sister, Dani (a pre-American Beauty Thora Birch), and stop the witches from staying in Salem permanently.

Though by standards of the 80s, Hocus Pocus seemed like tons of harmless horror-comedy, including a “good zombie” before zombies could be known to fall in love. By today’s standards, the film has become a little scary. My niece, who’s about to turn seven in a few months, made me turn the film off right before Max, Dani, and love interest Allison (Shaw) were about to enter the Sanderson’s home/museum — so basically, she just managed to watch the introduction. If we thought that was scary-silly back then, our children have pussied out and can’t handle their silly horror any longer.

As a child, one would get easily thrilled with the idea of having to escape the witches and Binx the talking cat (voiced by Marsden, who also guest-starred on Katz’s Eerie Indiana). However, as one grows older, your appreciation for Midler, Najimy and Parker grows tenfold. Though some of the dialogue in English seems off at times — Mary’s (Najimy) mentioning of a “Shish Kebaby” and I still wonder how Mary and Sarah (Parker) knew chorus lines should stand behind and sing towards the microphones — the Spanish Latino dub (which is included in the Blu-ray) seems to fix some of the details and makes it extra campy, making the experience watching Hocus Pocus that extra special. Or maybe it’s just nostalgia.

Special effects weren’t a match to that year’s VFX juggernaut, Jurassic Park (because, come on! It’s Jurassic Park!), but they fit the tone of the film. Visually speaking, I especially love that general moonlit frame of the Sanderson sisters flying, as Winifred asks Sarah to lure the children with her voice, which also reminds me that I’m tagging this a “musical” because you have Bette Midler, and you HAD TO have her singing for no reason. Hocus Pocus makes little sense from that point on, with all the bursting the top of your house off exit, and Winifred not taking the rare sensible advice from Sarah of taking some other child’s life instead of Dani’s. But, hey! If it had made sense, it wouldn’t be silly fun.

Besides your enjoyment of the sisters interactions — Sarah Jessica Parker munching on a spider, anyone? — there’s also bonus points for Dani… who, as a general rule, avoids damsel-in-distress status with her own snarky comments (that hurt Winifred, and irks her big brother Max with his bullies) — that’s Thora Birch for ya~ Then there’s Allison, who doesn’t get much of a build-up, but completely avoids having to be rescued (!!!), instead taking the role of a semi-know-it-all of Sanderson information, and she hits Najimy with a pan [1][2] — all while wearing sensible clothing! For Disney, that’s like trailblazing!

Overall, even though I LOVE Hocus Pocus, I know its own limitations. But there’s no rules saying you can’t love less than 4-star movies. Whereas there are quality films I’ve only seen once, I can say I’ve seen this one twice in a night and enjoyed every minute of it. And I will continue watching it. No shame. I’m taking a new stab with my niece and nephew this upcoming Halloween~

Plus, this is like the best thing Ortega has done, High School Musical notwithstanding