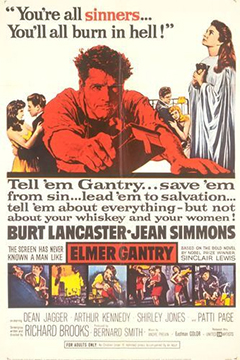 While many people may not have heard of Elmer Gantry, it was quite the controversial picture at the time of its release in 1960. Winner of three Academy Awards for acting and writing and nominee for Best Picture, Elmer Gantry brings many surprises in its handling of subjects like prostitution and religious corruption in a time period where censorship ruled the nation.

The film focuses on Elmer Gantry, a traveling salesman who can get around any situation. Cheating his way from town to town, he stumbles upon Sister Sharon Falconer, a woman whose revivalist preaching has gathered a large following within religious communities. With an extensive knowledge of the Bible and his impressive way with words, Gantry works his way into Sister Sharon’s road show, becoming an indispensable part of the tour. It isn’t until he encounters Lulu, a prostitute he knew long ago, that things get heated and his shady past begins to catch up to him.

The true magic of Elmer Gantry comes in the performances of the cast, and not only from those who claimed Oscars for it. Burt Lancaster, whose rich performance is so real that one can almost claim that he was born for this role, delivers a performance well-deserving of an Oscar from start to finish. With each sermon he gives, Lancaster dives deeper into Gantry, giving it his all and making the audience forgive and embrace this despicable character.

Shirley Jones stuns viewers during her short time on the big screen. Her work as a vengeful prostitute was brave and risqué for the times; the scene where she tells her brothel sisters of a sexual encounter with Gantry was enough to lock her in for the Oscar she won. Jean Simmons catches attention within minutes of her first appearance in her role as Sharon Falconer by emitting the purest of auras in her character’s naive and religious ways. Arthur Kennedy plays Jim, the investigative reporter who provides a voice of reason and compassion in a world full of corruption and conflict.

Due to the limitations placed upon filmmakers in the 1950s and 1960s, Richard Brooks’ film raises critical commentary on Christian revival meetings from the 1920s in blatant, yet subtle, ways. Rather than showcasing nudity, explicit language and extreme violence like many of today’s films, it addresses such controversy through satire. Sinclair Lewis’ satirical novel of the same title is adapted for screen in the best of ways; it presents humanity in all its beauty and ugliness. It shows religion as a double-edged sword— one that can provide a helping hand for those in need while leading the most devout souls to disaster.