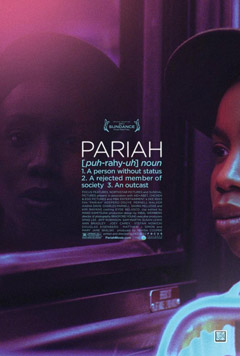 Dee Rees takes her 2007 short film of the same name, re-working it to give us a new Pariah. The film follows 17-year-old Alike (Oduye). Whenever it’s time to go to school (or church), Alike wears whatever she thinks her mother, Audrey (Wayans), won’t bother her with, be it her latest magenta sweater or a gender-neutral ensemble.

When Alike gets to school, she changes clothing — baggy pants, t-shirts and a baseball cap — to become Lee. She is shy and quiet with a knack for poem-writing, so she looks like a fish out of the water when best pal Laura (Walker) takes her out clubbing for some punani.

Alike’s parents are oblivious, or want to deny the fact, hoping it won’t be true — that their eldest daughter might be a lesbian. They frown upon her friendship with gangsta pal Laura, whom Alike’s mother thinks is a bad influence on her daughter. Making an effort to drive her daughter from her possibly gay confidante, she makes sure Alike begins hanging out with Bina (Davis)… but things are never as parents plan them to be.

Pariah has an interesting setting about a girl who knows who she is but is trying to come to terms with it against her surroundings. However, the film is ultimately a coming of age story where a young woman chooses to be free and move on with her life. It’s got a beautiful ending amidst all the heavy-handed repercussion of her actions — which can only happen because we’re such an imperfect society.

Though there’s a bit of humor in between all the seriousness of the story — many  delivered by Walker’s Laura, who manages to get Alike some props for “packing” on her date — the most interesting part of the film is Alike’s relationship with her mother. She is having issues of her own  regarding her marriage, and the falling apart of what she believes is the most important thing in her life.

Wayan’s character seems to be deep-rooted in tradition, despite her husband’s unwillingness to go to church on Sunday — I really have no idea how these two ended up together. She’s almost a little too typical an old school housewife, but I’m aware there are people like her still upholding their religious values that make her push her daughter (and husband) further and further away.

Pariah has really some stellar acting, especially from Oduye who is reprising her role from the short film. There’s a particular scene she shares with Mellesse, who plays Alike’s little sister Sharonda, where they both cuddle during an argument between their parents and Sharonda tells Alike that she hopes she knows that it doesn’t really matter to her, to which Alike just nods. Simple gestures like that are what’s memorable to me.