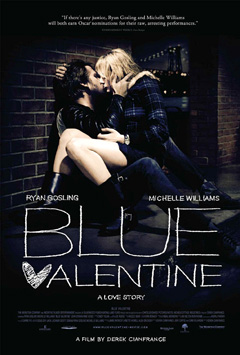 Blue Valentine chronicles the life span of a relationship between Dean (Gosling), a hard-working, chilled man, and Cindy (Williams), whom he meets at her grandma’s nursing home.

How the relationship withers away is devastating, considering the way it was edited non-chronologically. Blue Valentine overlaps situations and the things they say to each other. It’s not really a romance in the sense that you feel you’re on cloud nine like in a sappy rom-com. It’s nothing like it. You know what’s going to happen for sure, how both of them grow apart.

Williams’ and Gosling’s performances are raw, especially during the devastation period in which he’s trying to be something that she doesn’t really seem to need. It’s frustrating, and infuriating… even though you know how much Dean could love Cindy, there is a point when you — as a person and audience — go and say enough is enough.

I really have no idea how there are people taking sides on this story and calling the characters nasty names, when in reality both of them had some of the blame… and in the end, it is what happens to relationships. Do we really need to find a guilty side?

Also, a soft spot for those ending credits with the fireworks.

Recommended to anyone up for good performances, but avoid if you’re going through a tough relationship. The experience might be devastating for you.