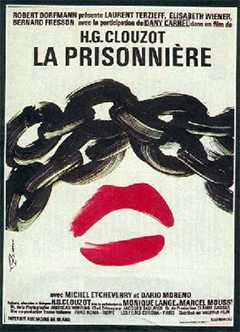 Henri-Georges Clouzot’s La Prisonnière works best in its attempts to overwhelm the senses. The colors, lighting, mirror use, and even its story, are all part of the film’s way of showing off its artistry. It’s often almost too preoccupied with being stylistic, but that isn’t necessarily a bad thing.

The film opens with an unsettling intro of a man playing with a rubber doll. This all leads into a fairly normal story about a modern artist, Gilbert, and his wife, that feels like a safe contrast from what started off the film. It doesn’t take long for the film to take a turn for the sexual as the real tale begins: one of submission and domination.

Stanislas is a man fascinated by these concepts, who in his spare time photographs women in submissive poses as he instructs them. Josée, the young wife, finds herself bored of her husband’s lifestyle and increasingly intrigued by the perverse, and possibly dangerous, world of Stanislas and his interest in S&M.

One might go as far as to say that La Prisonnière is the French edition of Fifty Shades of Grey made especially for fans of cinema and sixties pop art. It really dives into what makes certain women, especially a bored housewife like Josée, so susceptible to S&M and bondage. “Shame is part of the pleasure,” Stanislas says. It’s a simple story, but it’s one that offers a not-so voyeuristic view into an unfamiliar world that can be twisted to suit multiple fantasies.

Laurent Terzieff reminds me of the roles that Cillian Murphy tends to go for with horror, particularly Red Eye. There’s a certain allure to him — tall, clean cut, handsome — that disarms one at first, but the personality that accompanies those looks is bound to unnerve anyone. His tone is often harsh and it’s one that fits his character just right.

The beautiful Elizabeth Wiener’s performance as Josée is strong, but not perfect. It’s a subtle and angst-ridden one, that sometimes does not quite reach the level of desperation that one might expect from a character like hers, but that captures Josée’s descent into madness very well. Even when she seems the happiest and we’re treated to what seems like the sensuality that a typical romance might deliver, we know what lurks in the shadows for Josée.

While it may not be quite the masterpiece that some of his earlier films — like Les Diaboliques — are often regarded as, Clouzot’s final film La Prisonnière is a psychosexual rollercoaster of color well worth checking out.