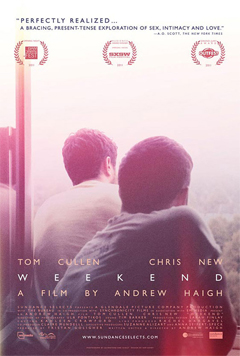 Decent gay films are almost as hard to find as a decent man. There’s no shortage of them, but finding one that’s actually worth your time is an excruciating journey. Luckily enough, Andrew Haigh’s latest film Weekend presents us with a tender and relatable film about two men that will tug at your heartstrings just the right amount.

Weekend begins on a Friday night when Russell heads out alone to a gay club after a house party with friends. By the end of the night, he heads home with Glen for a one night stand. The two men wake up and prepare to part ways, but exchange numbers in order to keep in touch. As they continue to see and get to know each other over the weekend, their brief encounter begins to develop into something more – something neither one could have expected.

While it may sound much like any average romance, Haigh’s film turns out to be much more than that. It’s a sincere and simple film that portrays a budding relationship between two guys. It’s rare to see something as authentic as this in LGBT cinema, in which both characters aren’t stereotypes – just real average guys who don’t realize just how important they might become to each other. It never tries too hard to force the sexuality of these characters onto audiences, and although gay issues are touched upon frequently in the film, they don’t feel out of place like in others.

The story of Russell and Glen is one that is very natural. Andrew Haigh has a talent for writing and it is easy to see through the dialogue between the two men. Aside from a gratuitous amount of drug use, there wasn’t anything that really stood out as trivial as even the simplest conversation about a cup was engaging.

Haigh may not be receiving much recognition for his small film, but it is certain that he is a director to look out for. His knack for storytelling along with his eye for beauty is easily visible in Weekend, and one can only hope to see more of his filmmaking in the future.

With very few moments where the dialogue dragged, the script focuses on the conversations between these two men — leaving many thinking about other brief encounter films like Before Sunrise and Before Sunset. This isn’t to say that they are the same, but the films all chronicle a budding relationship with the same sort of intimacy that is necessary for them to work.

Tom Cullen and Chris New deliver nothing short of award-worthy performances. It’s a shame that the film doesn’t have wider appeal because missing these men acting would be a tragedy. Cullen portrays the more introverted of the two men, revealing to us a quiet and vulnerable man. The subtlety of his performance is really stunning and there isn’t a moment when you don’t think his character isn’t genuinely feeling what he’s saying.

New, on the other hand, is brash and assertive as Glen, showing us a very different man than Cullen does. Their performances complement each other in the best of ways, making the relationship between these two men utterly authentic and convincing.

Weekend may not appeal to everyone due to the sexuality of its characters, but it is an honest film that will leave a lasting impression of many – regardless of their sexuality. It may just be one of the best gay films in years and something that rare is most definitely worth a watch.