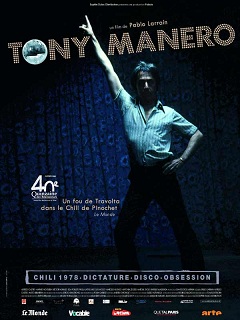 Following up his debut with an incredibly dark drama, Chilean director Pablo Larraín presents a commentary on Pinochet’s dictatorship in Chile through the most unlikely of eyes.

Larraín’s Tony Manero follows Raúl Peralta (Castro), a man obsessed with the disco classic Saturday Night Fever and impersonates Travolta’s main character Tony for a living. His obsession doesn’t seem too drastic until it takes hold of him to the point of murder and looting in order to maintain his strange relationship with the film he loves.

Tony Manero surprises in its quick bursts of violence throughout the stillness of the film. There’s something absolutely entrancing about Alfredo Castro’s performance as Raúl. Every time his silence is broken, it’s done in a fit of rage shown through a crime or murder. It comes as a shock when near the start, after helping a hurt old woman to her house in the film’s early moments, he beats her to death in her own home. This is just the first in many well-executed violent scenes, and the more often they come, the better they get.

The film’s sexual moments are uncomfortable as can be, working as an excellent look at the repression instilled in this man and an interesting contrast to the darkly humorous concept of the film. While he seems to not have much of an interest in the world around him, outside of Saturday Night Fever, it is clear that he is one of many people who were affected by Pinochet’s oppressive regime.

While Larraín’s direction is great, his writing with Iribarren and actor Castro is just as interesting, regardless of a few missteps and unnecessary bits here and there. There isn’t much dialogue, but there doesn’t really need to be, when everything can be said through Alfredo Castro’s actions as Raúl. The writers have absolutely no interest in veiling their political and social commentary, and it helps to set the film appropriately in late seventies Chile. Even before Tony Manero comes to its stellar grand finale in the form of a televised Manero impression competition, we’re shown some of the horrors of the dictatorship as Raul’s housemates are threatened and interrogated.

Tony Manero is far from tender, and its frank depiction of sexual content and violence may be hard for some to swallow, but Pablo Larraín’s sophomore film proves to be a strong one.