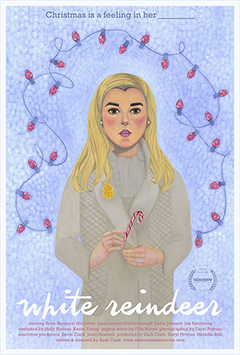 It’s the most wonderful time of the year. Kids jingle belling, gay happy meetings, marshmallows for toasting, caroling out in the snow, and everyone telling you “be of good cheer.” Well, unless your husband just got shot in the head.

And that’s life for Suzanne Barrington (Hollyman), a real estate agent whose favorite holiday was just thrown immensely off track by the death of her husband. With that being said, it’s clear that White Reindeer is far from your traditionally wholesome Christmas movie, and that’s what makes it so damn good.

Suzanne is a woman who genuinely can’t catch a break, and as heart-breaking as it is to watch her try to get by without having an ounce of genuine enthusiasm, it’s just as funny to see her reactions to everything life throws at her. Becoming friends with your husband’s stripper-mistress and spending all your money on cashmere sweaters and Christmas decorations is a weird way to jump over the hurdle that is grief, but the holidays make everyone a little crazy.

There’s no time of year when the lonely feel as lonely as the holidays and director-writer Zach Clark knows it. It’s a feeling that he capitalizes on throughout, emphasizing her sadness through comedy both light and dark without ever making us feel bad for laughing at her misery. But as deadpan as the presentation gets at times, something that will put off many a viewer, Anna Margaret Hollyman’s incredibly natural performance never allows us to believe that Suzanne is in on the joke that is her life.

That barrier between Suzanne and the audience is something a film like White Reindeer so desperately needs to avoid teetering into the typical Christmas movie that shamelessly panders to one’s emotional side. This doesn’t mean that beneath all the dark humor and absurdity – of which there is plenty – there isn’t a rather sweet edge to the movie that opens it up for many to relate to. It’s like the best eggnog; a blend of bitter and sweet that tastes better than it sounds.

Even when something as tropical and upbeat as Hawaiian Christmas tune Mele Kalikimaka is brightening it up, White Reindeer never loses sight of the fact that it’s first and foremost a movie about a woman trying to side-step the overwhelming grief of losing her husband. By showing us how she attempts to find some semblance of enjoyment in the holidays, Zach Clark succeeds in making a film as melancholy as it is entertaining, and that stands out among recent holiday fare.