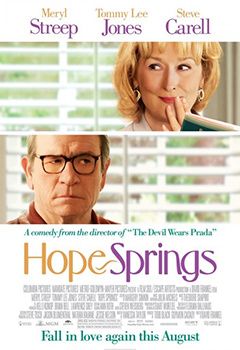 Relationships are hard work, and so often we’re treated to these impossibly stupid stories of teenagers falling in love instead of anything real or raw. Disguised as a sex comedy for adults, David Frankel’s Hope Springs actually gives audiences a look at a couple still fighting for their relationship no matter what cards life has dealt them, and that’s something to respect.

Thirty-one years of marriage has taken its toll on Kay (Streep) and Arnold (Jones), leaving them in separate bedrooms with scarcely any physical contact other than an occasional kiss on the cheek. Determined to bring passion back into their marriage, Kay makes reservations at a week-long couple’s therapy retreat, which Arnold reluctantly agrees to attend.

There are moments when Hope Springs feels a little uncomfortable, but the sheer frankness of the situations and dialogue it presents is one of the film’s strongest aspects. Much of the humor relies on character reactions and the delivery of lines, as watching an older generation of people react to sexual discussion is always amusing, but here this is done without any malice. Where many writers would mock the discomfort of the couple’s marriage problems, Vanessa Taylor treats her characters with an empathetic care that is rare nowadays. Taylor never takes sides, always giving both of these characters time to grow and express themselves.

As seen in The Devil Wears Prada, Frankel and Meryl Streep are nothing less than a match made in movie heaven, and Hope Springs only serves to reinforce that. Streep’s performance here is much more subdued than in their previous collaboration, but she still delivers excellent work as usual. Much of it lay in the details, whether it’s a smile or some crying, or even the way she gets flustered and adjusts her clothing to appear more conservative whenever sex is brought up.

Tommy Lee Jones is just as great and the two work together marvelously. His extremely reserved, strictly missionary-style character might seem like your usual old coot at first, but Jones delivers a layered performance that offers considerable depth alongside comedy. Carell’s character is just as important to the story as either lead, but his work here doesn’t offer anything more than what was necessary for the role.

Even with its engaging performances and touching, funny story, Hope Springs has its flaws. While the soundtrack features some great selections, it sometimes feels unnecessary and loud where just a subtle piece of music for emphasis would work just as well. As the film reaches its end, it also suffers from some awkward pacing and fluff, but it’s certainly not enough to take away from how good it really is.

Some people might try to make you think of Hope Springs as just some movie about old people and sex, but it is really a tender look at two people are just trying to rekindle the intimacy in their lives.