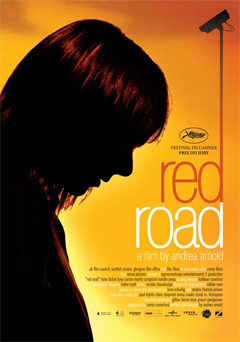 Of the few female directors out there, Andrea Arnold is the one most willing to take risks for her films. Her debut feature Red Road proves that under her ballsy hand, she can make a film even more intense than any man in Hollywood can.

Red Road takes place in Glasgow, where Jackie works as a CCTV operator. She spends her days watching over the working class on dozens of screens, protecting them from any unseen dangers. It isn’t until she sees the face of a man she once knew on screen that she begins to fixate on him and her past rather than her job. At first, Jackie keeps her distance by following the man around from the safety of her office through the cameras. Left with no choice, she follows and confronts him, leading her down a dark and unexpected path.

There’s something about Red Road that has the power to impress and mesmerize even in the simplest of scenes. A woman sitting in front of multiple screens and watching over people doesn’t sound like the most appealing film, but Andrea Arnold has the magic touch that a story like this needs. By slowly unveiling details from Jackie’s past rather than blatantly telling you about her life, the script takes its time to develop a character that we can sympathize with, even when we question her actions. This isn’t to say it doesn’t have some minor flaws — specifically with the pacing in the latter half — but it’s the sort of film that doesn’t let up, even though it stumbles at times.

Regardless of how well-scripted the film is, it would be nothing without its lead actress, Kate Dickie. Her performance is a powerful one, subtly changing her character through the use of her expressions rather than words. The transformation of her character is interesting to watch, as Dickie is genuinely committed to the role, even when her actions and motivations are hard to understand. Tony Curran also does well as Clyde, the man from Jackie’s past that she has fixated on. His performance is memorable due to the range he shows, bouncing from frightening and touching, while showcasing his emotions rather than subtly revealing them.

The grandest thing about the film definitely has to be the way it was shot. The looks of this film are what really establish the feel that it’s going for. The way Arnold frames Kate Dickie’s face throughout the film and sometimes closes in on her eyes is just lovely to look at. Even when Dickie isn’t the focus of the shot, you’re looking at the kind of photography work that might be framed in a museum.

In Red Road, there is beauty to be found in even the seediest of locations. Whether it’s the dimly lit computer room or the sleazy apartment, the world that Andrea Arnold creates is a dark one, filled to the brim with desperation. Many would consider it depressing and grim, but this isn’t to say that they’re right, as it shows that there is plenty of hope stashed away for those who are willing to let go of the past.

Red Road is as tense as any drama can be, absorbing you into a voyeuristic world of a woman overwhelmed by her past and present. Even though it is her debut feature, it is proof that Andrea Arnold has been a talented woman from the very start.