The Fangirly Diary of a Geek Girl: One bad day away

Greetings, fellow fangirls and fanboys! This week Netflix might not the only one getting ready for all the new series or seasons, but they sure delivered their best! Also, while ones are learning the rules of the game, other might just change them! Here’s how the week started!

Here are the latest trailers for Fuller House in some the various languages available in Netflix worldwide. Not sure why, but I am quite attached to the Japanese dub!

Here’s the most recent teaser of Game Of Thrones Season 6! And hey, I see dead people! Get ready for new episodes on April 24th!

Talking about that film, James Gunn, besides praising Deadpool, is afraid Hollywood will take the wrong lesson from its success…  instead of the correct one, that the public wants original stuff!

Over the next few months, if you pay attention to the trades, you’ll see Hollywood misunderstanding the lesson they should be learning with Deadpool. They’ll be green lighting films “like Deadpool” – but, by that, they won’t mean “good and original” but “a raunchy superhero film” or “it breaks the fourth wall.” They’ll treat you like you’re stupid, which is the one thing Deadpool didn’t do. But hopefully in the midst of all this there will be a studio or two that will take the right lesson from this – like Fox did with Guardians by green-lighting Deadpool – and say – “Boy, maybe we can give them something they don’t already have.” And that’s who is going to succeed.

In other superhero news, here’s the trailer for Daredevil Season 2, and it’s so fantastic I got chills! That or the vaguely religious background music.

The new theme song for the new Powerpuff Girls has been revealed. I like the visuals and I like the song fine enough. But I was expecting a cover of that whole “fighting crime, trying to save the world” song, since everything is so similar. Oh well, guess I could get used to it like I am used to a new opening song every new season of an anime.

Dear John Boyega is learning to play the game, and said there could be Star Wars romance between Finn and Poe in Episode VIII! Who knows! Yeah, kid, as much as I would love that, I doubt Disney would allow it. Thanks for trying tho!

As far as I’m concerned when JJ [Abrams] sat us down to go through the script, it was a bromance. But now I’m learning what Mark Hamill said before when he didn’t know that Darth Vader was Luke’s father: you never know what they’re going to pull. I’m looking at the director Rian [Johnson] closely so he can get me involved early, so I can prepare myself. So who knows?

Check out this first look of Xena: Warrior Princess ongoing comicbook series! The first issue will be available on April 13th! 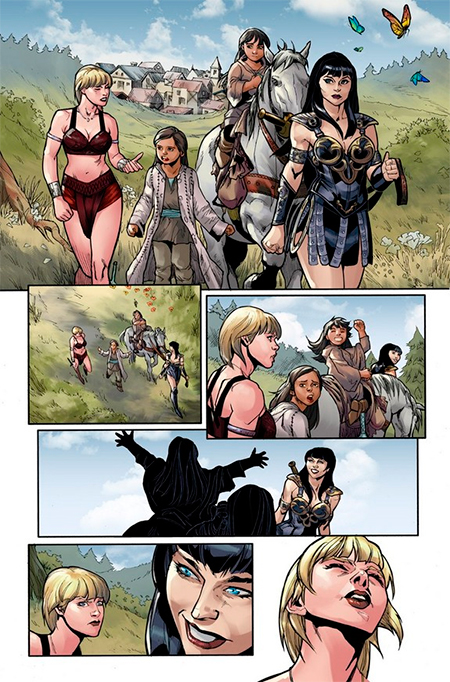