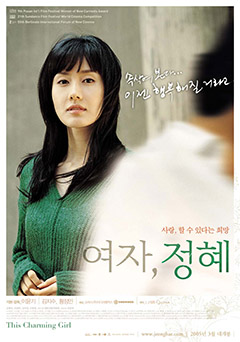 Lee Yoon-ki is almost certainly the only South Korean filmmaker working today who has predominantly made literary adaptations. Other than his second, and arguably weakest, feature, the Los Angeles-set Love Talk (2005), which Lee partly based on the lives of Korean immigrants he encountered during his time in the U.S. (he graduated from USC), his remaining four films have been sourced from short stories—by female writers.

This fact becomes more valuable once one examines the subjects and themes of these films—two of which are wholly centered around women—and the richness of their female characters. That’s not to take away any credit from Lee, however, who is clearly attuned to the sensibility of the material he has worked with, which he likely has had to expand in most cases. In a film culture where sexist and misogynistic content remains a problematic concern, it’s refreshing to encounter someone who is focused on making small, delicate films that prioritize women’s subjectivity.

Lee’s confidently minimalist feature debut, This Charming Girl (Yeoja, Jeong-hye; literal translation: “A woman, Jeong-hye”), is a tender and nuanced portrait of a woman who appears to be quite normal on the surface, if perhaps a shade too withdrawn. Though not quite ordinary in terms of looks, this mid-to-late-twenty-something nevertheless leads a routine, solitary existence. The only people she seems to be in contact with are her coworkers at a small post office.

Lee’s camera nestles pretty close to her, intimately capturing her daily routine. And it’s largely through this method, along with brief subjective flashbacks, that we slowly but surely become more acclimated with this character and the reasons behind her emotional suppression. There’s a tautly staged encounter with an ex, which turns out to be slightly more revealing, and eventually leads to another situation outside her comfort zone. This terrific, most verité-like sequence in the film, in which a young and overeager salesman leads her around a shoe store like cattle, ends with a rare display of agitation on her part.

Lee and DP Choi Jin-woong’s color palette is exquisite; the reliance on blues and greens renders the film a cool, elegant look, very much in tune with the outward appearance of its protagonist. A huge admirer of Hou Hsiou-hsien’s work, Lee has a similar tendency to avoid dramatic fireworks and trusting his keen, graceful eye and attention to detail to reveal the film’s themes and motifs. In this case, the “denouement” comes not only well before the end of the film but also during one of the film’s quietest moments, in which the protagonist is seen nursing a drunk, possibly suicidal stranger. If anything, it only heightens our anticipation for the rest of the proceedings.

A veteran of Korean television, Kim Ji-soo gives a surprisingly understated performance in her first big screen role. She is as beautifully poised and poignant as Lee’s aesthetic. Though the film received its due on the festival circuit—it won awards at Berlin, Pusan, Deauville, among others—and in its homeland, it unfortunately didn’t garner much attention in the U.S., and the same has held true so far for the rest of Lee’s work.