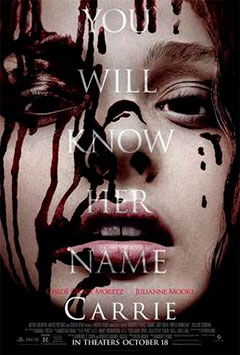 I read somewhere that this Carrie was going for a more faithful adaptation of Stephen King’s book, instead of a remake of Brian de Palma’s movie.

While this movie wasn’t a shot-by-shot remake of the 1976 film at all, the faithfulness to the book amounts to a couple of extra details. The story is basically the same, Carrie White (Moretz) has her first period while showering after gym class. Poor girl has no idea what’s going on with her and thinks she’ll bleed to death or something. Instead of helping, the other girls mock her and, because it’s modern times!, film it with a phone. Gym teacher, Rita Desjardin (Greer), tries to comfort Carrie and punish the other students. Margaret White (Moore), Carrie’s mother and total religious psycho, locks her daughter in a “prayer closet” because apparently menstruating is a sin. One of the girls, Sue Snell (Wilde) feels guilty and tries to make it up to Carrie by making her boyfriend take Carrie to the prom. Chris Hargensen (Doubleday), also one of the girls involved, not only uploads the video to YouTube, but because she will miss the prom as punishment plans to take revenge on Carrie publicly humiliating her. Meanwhile, Carrie learns she has telekinesis. We all know how that ends.

Except the part we all wanted to see is not like the original movie. In fact, it’s actually more like the book, as far as body count goes. Certain situation surrounding Sue Snell is also more like Stephen King’s novel.

But how Carrie fares as a movie on its own? It does well enough, but it’s not great either. The movie is entertaining enough, but it is not very memorable. While it was interesting how they showed Carrie’s progress trying to control her powers, it made me think of a dark Matilda instead. And when the prom prank was approaching, I felt that knot in the throat, expecting that awful/awesome scene to come. Yet the way we got more or less controlled power instead of explosive rage, made it all the less exciting, even if it was more cathartic to watch, especially since it was gorier, which is how modern audiences like it now.

All the women in this did a decent job, but the only remarkable one is Julianne Moore as the fanatic yet somehow more realistic Margaret White. And that made it extra creepy. I appreciated how haggard they made her look although she’s still too good looking to be Margaret White. But Chloe was too conventionally pretty to be Carrie, and maybe if she were a better actress like Moore I could have ignored that, but she isn’t and I couldn’t. Maybe someone like Saoirse Ronan, who’s also very good looking but in a quirky way, could have done a better job. I did appreciate that they actually had a teen playing a teen though. It was a bit obvious that her classmates weren’t. That said, Wilde and Doubleday delivered and made us feel for the characters as we were supposed to. Especially now that bullying is such a relevant issue.

Poor Carrie. In a perfect crossover world, she would have found a (kinda) perfect home at Xavier’s School for Gifted Youngsters.