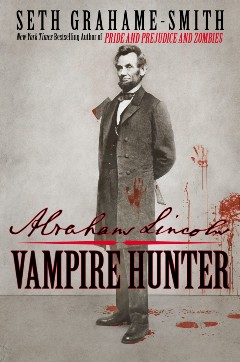 “Imagine what might have happened in Europe had there been no America for vampires to flee to.”

Seth Grahame-Smith’s earlier mashup novel, Pride and Prejudice and Zombies, imagined that the various officers in Jane Austen’s novel were stationed throughout the United Kingdom to control the large zombie population. Elizabeth Bennet and other characters trained in martial arts for self-defense against the undead “dreadfuls”. In Abraham Lincoln, Vampire Hunter, Grahame-Smith adds new dimensions to the tale of Honest Abe. What if vampires had settled in the Americas after fleeing many a violent European revolution? What if their presence was a hidden factor that spurred the South toward civil war?

This blend of history and high-concept is engaging. The characterization is fine, though somewhat simple, aside from Abraham Lincoln and his family and allies. Even with fierce vampire-hunting action, the extreme aspects are filtered through a knowing yet downplayed tone, easing fantasy in with what is known about the president and his era.

While the ending is good, it’s not completely conclusive, and a few details seem forgotten by that point. Some of the author’s footnotes are also unnecessary. Nevertheless, Abraham Lincoln, Vampire Hunter is a fun read that exploits the possibilities between history and legend.

P.S.: The upcoming movie version just released a trailer [1], and the cast seems to suit the characters. Author Seth Grahame-Smith aided with the screenplay and commented on the process of cinematic adaptation in this interview.