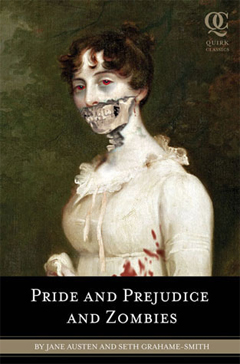 “It is a truth universally acknowledged that a zombie in possession of brains must be in want of more brains.”

Have you ever picked up a classic work of literature and thought, “This needs more zombies”? If your answer is “No”, this is not for you. Click the back button please. If your answer is “Yes”, then maybe you have Seth Grahame-Smith’s mindset when he accepted the project.

For those that worry that Pride and Prejudice and Zombies will ruin Jane Austen’s witty story about sexual politics and social class, fear not. It’s (almost) all there. Elizabeth Bennet is still a prejudiced snarker and Mr. Darcy is still a prideful snob. You still have your beta couple, with sweet idealist Jane Bennet and nice guy Mr. Bingley. You still have the cynical dad, the interfering mom, silly younger sisters, and the, apparently, perfect Mr. Wickham.

Except all of them have to live in a world where nobody dies anymore (and poor undertakers are out of a job) and you have to take measures to survive against the “unmentionables“.

Mr. Bennet took his five daughters to China to train in martial arts and now lives in the English countryside with his own personal army. Mrs. Bennet is still more worried about marrying off her daughters. Of course, this shows in the personalities and actions of their daughters, especially Elizabeth’s, who is quite more sensitive about perceived affronts and only her self-restraint stops her from avenging her honor. That final confrontation between her and Darcy (and the one with his aunt, Lady Catherine) becomes more action-packed that way.

All in all, this is pretty much a cozy catastrophe, with the people in town moving on with their lives as if the zombies were no more than a pesky guerrilla force, and having no troubles other than being momentarily sad that the “sorry stricken” ate their kitchen staff. These zombies are obviously old news and people have learned to “live” with them.

If there is one the thing that does “improve” over the original is that with zombies, you now have a legitimate reason for the militia stationed in Hertfordshire. And the fate of Wickham, although that didn’t have direct relation to the undead.

I would have given it four stars if I weren’t so nitpicky, but there are no raccoons and skunks in England’s woods. And you don’t learn how to use a katana in a Shaolin temple.