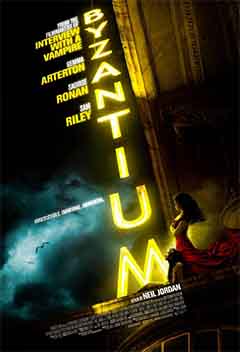 With each modern vampire film that releases, the combined longing for another decreases, so it’s really a wonder why they keep happening. Yet, in comes Neil Jordan, director of the popular Interview with the Vampire, to bring a fresh new film into the dying vampire breed.

Byzantium tells the story of two women, Eleanor and Clara (Ronan and Arterton), who are vampires trying to live quiet and simple lives in the shadows. As more people discover who they are, and unfamiliar men begin to chase them, they struggle to keep their past a secret.

Ranking up with Thirst and Let the Right One In when it comes to the best modern vampire works, it’s easy to see why Byzantium works so well. It’s well-written, it boasts great lead performances, and it’s absolutely gorgeous to look at. Sean Bobbitt’s cinematography work here is top notch, bathing each frame in beautiful colors, none of which is as prominent as that lovely blood red.

It takes a slow and steady approach to unfolding its story and never allows its romantic subplot, which can get a little bland at times, to fall into young adult fiction territory. Jordan’s knack for blending period style flashbacks with the modern world fluidly works beautifully with Moira Buffini’s history heavy script.

The way Buffini gives these characters depth by exploring their past and present is smart, and while the past is occasionally more interesting than the present, it’s never particularly boring. The character writing is top notch, rarely allowing for a weak link. Those that aren’t important are quickly disposed of.

Byzantium thankfully takes a heavy focus on the two women whose stories it’s telling rather than any of the subplots featuring the far less interesting supporting players. Both Saoirse Ronan has played the contemplative type often before and again she does it well, occasionally delivering some lines with a bitterness rarely shown, but the real surprise here is Gemma Arterton. Not having been one to leave an impression just yet, Arterton really falls into the role of this sexually-fueled and self-reliant vampire in the best way possible.

For everything the performances do, the film would be nothing were it not for Buffini’s writing unabashedly feminist writing. Her two women are practically complete opposites, one being the reserved innocent and the other the sexually liberated force of nature, and yet each one represents strength in her own way instead of just the typical “strong female character.” It’s a rather nice touch in a world so full of bland writing for women in films.

Outside of a slightly boring and typical romantic subplot, Byzantium really succeeds at delivering an interesting and original tale of immortals that’s well worth your limited mortal time.