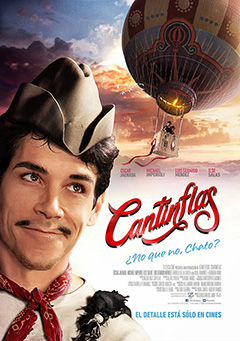 First of all, I had little to no interest in watching Cantinflas at all because 1) I haven’t been exposed to him at all, despite being aware of how big of a deal he is in Mexico; 2) The trailers seemed unappealing despite its colorful visuals. By chance, I ended up watching Sebastian Del Amo’s directorial effort that had the big task of dealing with one of Mexico’s biggest stars of all-time.

For some odd reason, the 2014 biopic of Cantinflas centers itself around the pre-production stage of (eventual Oscar-winning film) Around the World in 80 Days, helmed by producer Mike Todd (Imperioli), who wants to shock the world and recruit the world’s top stars for the film adaptation of Jules Verne’s novel. Among the top stars Todd wants to recruit, there’s Mario Moreno Cantinflas.

As Todd’s quest goes on, Cantinflas also heads back to the 1930s and shows Cantinflas (Jaenada) in his early days, struggling to make it big in his hometown as both a boxer and bullfighter before he became aware of his true talents. Not only do we get to see his rise thanks to his comic brilliance and some aspects of his life, but there’s also issues regarding the acting scene in Mexico back in his time, which Del Amo shows on screen.

Like I said before, I’m not totally familiar with Cantinflas — I grew up a bit with Roberto Gómez Bolaños’ El Chavo del 8 and my Mexican interests, film-wise, are pretty much the Three Amigos — yet that hasn’t stopped me from seeing other biopics from other persons I haven’t heard of before. Some films end up being good, great, outstanding, average, bad, etc. To Cantinflas‘ credit, the start is actually interesting to watch as we see Todd’s quest mixed up with Cantinflas’ early struggles; there is some connection with both as they try to rise above their respective ceilings. However, the biggest problem is the end result of the film being hardly engaging to watch thanks to the film trying to approach several aspects of Cantinflas’ life (and Todd’s story) with a lack of focus, drama, humor and weight in the script; ahí está el detalle. Sadly, both leads suffered with the script the most.

Imperioli’s Todd, whose struggles to produce Around the World in 80 Days came across as uninteresting to watch partly due to a lack of Cantinflas in the States as well as Todd’s stakes and issues lacking tension. Okay, Todd was an unproven producer in films who had a Broadway past, but that aspect was briefly glossed. Worst of all, Hollywood looked pretty damn boring on the screen. On the other hand, Jaenada’s take on Cantinflas was actually entertaining to watch for the most part, but the interest on the character diminishes thanks to the film shifting between its lead characters and somehow prioritizes Todd’s production above the title character at times, which is a sad sight. Even worse, the film mostly glosses on Cantinflas, which is something I’d forgive if the film was funny or interesting (it wasn’t for the most part), except for the interactions with his life Valentina (Salas), who happens to change him by the end of the film. I liked Salas’ performance despite her few minutes of screentime, especially in the scene where she’s upset at her husband for missing an important appointment.

For an actor of such iconic value, he deserved so much better than what he got on screen this year. For me, Cantinflas was just barely better than something like Annabelle. I can see why Mexico picked it as their Academy Awards Best Foreign Picture candidate, but it’s a head-scratching decision to go with quite a boring film.