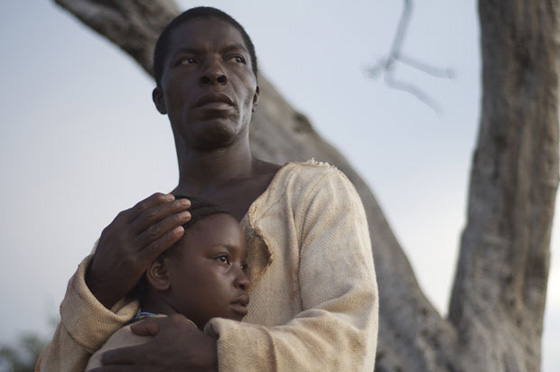 I Am Slave is a made for TV film by the UK’s Channel 4, based on the life of Mende Nazer and written by Jeremy Brock (Driving Lessons). The film stars Wumi Mosaku as Malia, a young woman who sees herself enslaved by her diplomatic “owners”, one of them Lubna Azabal (Incendies), in present day London.

It all starts when Malia gets separated from her family and is abducted from her Sudanese village. Under the orders of Hiam Abbass (The Visitor, Amreeka), who beats her up and sends her away to London after she caught Malia playing with her daughter, Malia is sent to work under a wealthy Sudanese family.

Though the film is largely focused on Malia’s London captors and their abuse, it often goes over the line of one-dimensional antagonists — even with actresses such as Azabal or Abbas, who have more than proved their talent. What holds the film together, however, is the relationship between Malia and her father, played by Isaach de Bankolé (Manderlay), who never gives up finding her.

Though the scenes in Sudan are seldom and scattered throughout the film, they deliver the elements to build Malia up as a character. It’s especially effective when after years apart from her father, she catches a glimpse of him working as a garbage collector asking for her around the city. We know it’s never going to happen, but the scene is intense without the need of much confrontation, except her breaking down.

Wumi Mosaku has the harsh task of keeping the whole movie together, and she does so with little dialog and those expressive eyes, which go well with Bankolé’s own expressiveness and warmth.

However, having known people whose employers have asked for their documents — to render them non-people — I found the focus of I Am Slave to be somewhat off. Yes, Mende Nazer’s abuse in real life was awful, but the film trivializes her treatment and shows us she gets beaten for playing with the daughter of the Arab family, when actual physical and sexual abuse was intended.

The film avoided the harsh parts, and made I Am Slave about a Sudanese princess who didn’t want to become an unpaid nanny who was abusively punished for stupid things — sneaking out of the house or using the phone. The only scene that rang true to reality — besides the Sudanese brother that helped her at the end, like in Nazer’s case — was the scene where Malia asks for the driver’s help, and he was unable to give it for understandable reasons.

Overall, the film sheds some light into this type of modern day slavery, but its watershed sole focus on the diplomatic family makes the film single-layered in its treatment. Some historical background prior to Malia’s abduction, as well as focus on how Malia ended up in the first Arab family’s household, was necessary to add another dimension. What’s even more ridiculous is the swapping of the slaves from cousin to cousin. It makes the whole family in question look like caricatures.