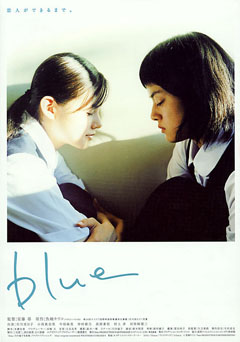 Based on the manga by Kiriko Nananan, Blue follows quiet Kirishima (Ichikawa), a high school girl that spends most her time admiring what’s around her rather than interacting with it. With her friends, she’s the regular high school girl who has lunch with other girls, and doesn’t know what to do after high school is over.

One day Kirishima strikes up a friendship with Endo (Konishi), a girl with a mysterious past — for a high school girl — and begins admiring her.

For all the things Blue had going for it, there’s also that painstakingly slow pace. I think it’s slower than the slowest Japanese film I have ever seen. The film is a very contemplative one, with long shots of characters sitting down not saying anything about the mundaneness of our lives.

There’s no high tension drama, no one dies, and there’s no sex — in an obvious way, anyway — yet Kirishima’s attraction to Endo is a mystery worth looking at. Ichikawa seems to play her as interested in Endo because of the things surrounding Endo, instead of who she really is. Kirishima doesn’t love Endo, she finds her… peculiar. She likes the art books, the foreign music, the somewhat secret past. It’s something neither she nor her friends have experienced.

In turn, Endo never shows us what we should love about her, and as the film progresses we just feel sorry for Endo because Kirishima does find her passion while Endo is at a loss. But maybe that’s the film’s intent, not tell us a lovey-dovey film about two girls falling in love, but two girls that find each other yet part in different directions.