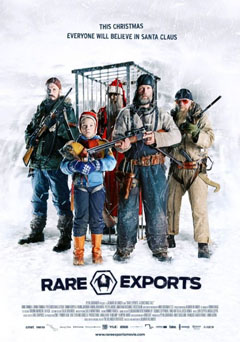 Is it time for a new Scandinavian wave at the cinema?

Rare Exports — with the silly American subtitle of A Christmas Tale — is a Finnish (mostly) film that follows the excavations of a “sacred” tomb of what some believed to be the original Santa Claus, who instead of giving good kids gifts, punishes naughty ones.

Little Pietari (Tommila), an awkward little boy, is the only inhabitant of the Korvatunturi mountains who suspects what they have unleashed, as supplies begin to get stolen and kids to disappear.

There is something very exciting about the premise of Rare Exports. It’s a mish-mash of genres that work together. From a kid’s action adventure with hints of horror and comedy, the film doesn’t seem dull even if it drags at times.

It’s graphically scarier than a family film, showing you grim ideas of heavy spanking and a Santa that eats children, as well as — normal — scenes of butchering a pig. Funny considering the film is rated R in America, when it probably should just be PG-13. Because in essence, Rare Exports is an edgy family film more than a mere horror flick.

The look of the film is slick, with quite dynamic action sequences, and saturated colors that enhance the fantasy look. While the beginning of the film suffers from scenes that drag the story, the ending seems a bit rushed with a sudden 360 from Pietari. Also, what happened to the money shot? Just one shot of it walking as it exploded would have been okay. The only excuse for that needs to be “budget constraints”.

Ten-year-olds should leave this one terrified, or at least a tiny bit better behaved after it. Because the idea of a terrifying Santa Claus is a deliciously evil one.