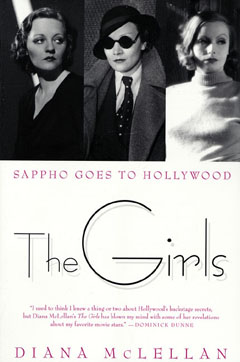 My fascination with Greta Garbo made me pick up this book. Author Diana McLellan – a writer for the Washington Post, hence… journalist? – tells me she’s written the book with accounts of stars’ memoirs, FBI and CIA documents and everything in between and around the people involved in this book. However, I decided to read this from the point of view of a fan fiction reader.

Now, I have never read (or written) fiction based on real people, but I’m aware it exists. In The Girls, there’s so much stuff going on – let’s say “so many characters” – that you’ll get confused as to who’s who from time to time. If you’re already familiar with the names — besides Greta Garbo and Marlene Dietrich — you’ll be more than fine probably.

In it, McLellan says that Garbo and Dietrich met on the set of The Joyless Street, which goes uncredited on Dietrich’s filmography even to date on IMDB, even as the author states that there’s an interview in which Marlene talks about a crucial scene that was eventually cut from the film, and that they had a fling that ended so bad it would define the rest of their lives. Then, throughout the whole book, they begin explaining how Hollywood was during the 20s and early 30s, and what events began changing the perceived morality of that era… bringing on the Hays Code. It deals with Marlene’s supposed husband, a spy named Otto, who worked for the Communist Party as the Nazis were taking over Europe. And just like in movies, there is war, spy stories, people using each other and so on. The book also deals with loads of sex. It talks about how gay Hollywood was. Or, I guess, how lesbian it was or how bisexual. It turns out everyone I watched in old films was not completely straight. LOL

The book contains so much drama and recounts anecdotes of so many celebrities of the time, that I began thinking that it might be a little too adorned to be completely true. Of course, there’s that bit about what truth hides behind the lies they tell you in official biographies or approved releases. Or something about the lies hidden behind the “truth” they give you. It was just a little too much fun to read all these encounters. My favorite being that of Greta Garbo and Joan Crawford – how these details are known, not entirely sure – because I love the both of them.

During Grand Hotel, she [Crawford] said later, the two passed on the stairs one day, and Joan was so overcome that she lowered her eyes. Garbo blocked her way with an arm, gazed directly in her eyes, and crooned, “I am glad we are working in the same picture.” Joan reported that Garbo “took my face in her hands and said, “What a pity! Our first picture together, and we don’t work with each other. I am so sorry. You have a marvelous face.” Her knees went weak, Joan related. “She was breathtaking. If ever I thought of becoming a lesbian, that was it.”

That’s from that famous Garbo/Crawford not-getting-along report I’ve read so much about. I mean, I really REALLY loved Crawford when I saw Grand Hotel — included in the Garbo Collection — that I ended up buying the Crawford Collection. LOL So I pretty much agree with Garbo’s possible comments on her marvelous face. xD

As for Marlene Dietrich… Wow~ her chapters. I thought I was reading one of those cheesy romantic novels that grown married women read. LOL She really REALLY got around. With a lot, and I really mean A LOT, of people. It’s like, she was older than any of my parents, and she was still getting some. Disturbing, but true. LOL

Marlene tore down Edith’s panties backstage in a Berlin theater and, using just her mouth, brought Edith’s to orgasm.

Even her daughter Maria was afraid her mom would sleep with her fiancé. xD

But because this is about real people who have passed away, these “characters” all die in the book, and it is the most saddening experience I’ve had reading a book. I literally couldn’t keep the book down while reading the last chapters and thinking about Garbo’s sad, SAD destiny.

As Garbo’s health worsened — she endured a mastectomy, a heart attack, and thrice-weekly kidney dialysis in the late 1980s — she was tortured by regrets.

Should she have sacrificed her privacy and her reputation to sweeten her bitter and lonely old age with a life’s companion? She told her Swedish friend Sven Broman that she envied the old couples she saw tottering down the street arm in arm: “You don’t have to be married, but it means a lot having a partner for life… I don’t have one… I regret that.”

My heart just broke with that.

Of course, the book doesn’t end on a sad note. It talks about what came as the gay movement for gay rights became more and more important with icons like Madonna, Melissa Etheridge, and k.d. Lang. They even mentioned Ellen’s famous episode and coming out. Reading about Anne Heche made me laugh a bit and made me realize it’s 2010 – 10 years after the book, and hey! Ellen’s married! Etheridge is divorcing, Neil Patrick Harris is having babies! Gaga has won every possible award ever, it seems. Glee’s the gayest show in town, and Modern Family has the best gays xD and~~~ well, there’s just so many gays in the world now.