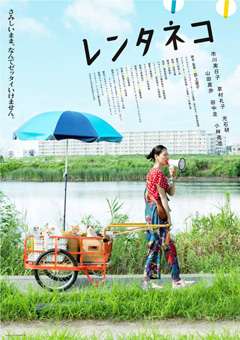 I would call Naoko Ogigami’s type of humor quite… particular. But ever since I saw Kamome Shokudo by chance, I’ve been taken by the quiet hilarious nature of her storytelling and her characters, so I was really looking forward to seeing Rent-a-Cat, which starred one of my favorite (and quite underrated) actresses, Mikako Ichikawa, often relegated to supporting actress instead of leading.

Unlike Ogigami’s previous films like Kamome Shokudo or Megane, Rent-a-Cat doesn’t even count with a cameo appearance by Satomi Kobayashi, and the missing presence of Masako Motai is felt even more, despite my love for Ichikawa. The three of them have been working with director Kana Matsumoto on films like Mother Water and Tokyo Oasis — you know, the Japanese entertainment industry is minuscule.

In Rent-a-Cat, Ichikawa plays a quirky cat lady named Sayoko. She escapes most of the characteristics of the cat lady [1] from The Simpsons, because as social media has shown us “cats are super cute” [1] [2], loving cats and being surrounded by them is not crazy at all. Instead, the cats’ magnetism towards Sayoko is funny, explained as a certain smell or Sayoko’s past life as a locust, according to Sayoko’s pesky “old lady” neighbor (Kobayashi).

Though nothing really big happens throughout the course of the film, a characteristic of Ogigami’s storytelling, and Sayoko goes through her life helping others fill the holes in their hearts, the most interesting aspect of her character is that Sayoko’s purpose in the beginning of the film is “to meet someone and get married to him,” which suddenly evolves to “meet someone, get married, and go to Hawaii for Honeymoon.” Women’s sole purpose in films that don’t revolve around chasing bad guys (at times) is to settle for someone — meet “the one” and not be lonely. In here, Sayoko is in her 30s (I know, Ichikawa doesn’t look a day older than her 20s), so her “expiration date” is almost up. As the audience, we also feel that her interest in having people fill the hole in their hearts is a cry for help from Sayoko, whom we suspect is also lonely. But she isn’t.

At a point when Ogigami could have turned this into a regular coming of age drama, in which Sayoko might have realized her loneliness and meet up with the delinquent, who would have predictably captured her heart, she doesn’t. Ogigami’s characters are anything but ordinary, Sayoko remains unchanged, despite realizing her loneliness. She keeps on walking the riverbank shouting, “RENTAAAAAAA-NEKO!” as she is intent in helping other people forget their loneliness. And as a sweet (feminist?) gesture, Sayoko’s wish to be married that year drops to the floor.

Though Rent-a-Cat lacks a lot of the more comedic moments that Masako Motai provided in previous Ogigami’s films, it still holds some of the characteristics that made those a success. And if that doesn’t work, well, at least, it could be Tumblr Cats approved.