My SO Has Got Depression 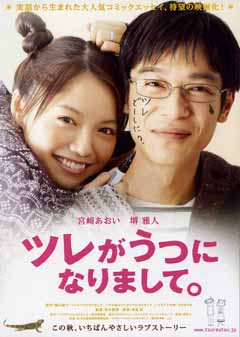 Actors Aoi Myazaki and Masato Sakai get together once again as husband and wifey since their collaboration on the 2008 Japanese historical drama, Atsuhime, in a contemporary drama about human relations, depression and catharsis in My SO Has Got Depression. At first view, it seems the movie, whose original transliteration is Tsure Got Depressed, has intentionally used some bizarre English as per “funny Engrish” tradition. Later, I figured the “SO” in the title is just referring to “significant other,” no bigger mystery to uncover.

In it, Tsure (Sakai) and Haruko (Miyazaki) are a young married couple who ended up together after a very bizarre and passive courting — a definitive moment in their relationship seems to be dictated by Tsure’s support of Haruko’s manga artist dream, while he took on the responsibilities of providing for the household at a no-future job at a small foreign customer center. There’s no romanticism involved and their interactions seem as far from an out-of-Japan perspective of what marriage is or should be. One ends up thinking that it’s no wonder Tsure ends up being diagnosed with depression.

Despite what the premise (and title) of My SO Has Got Depression might suggest, the execution and pace of the film give enough moments to not be completely depressing, and won’t be the source for any wrist cutting. Yes, we do follow Tsure on his journey of understanding depression and Haruko’s journey of accepting her husband’s illness, but I never felt like the audience was meant to pity them, in fact, there were many a moment where I flat out laughed.

In a movie like this, it is very important to have strong leads and Miyazaki and Sakai are up to the task. Despite the lack of husband/wife interaction, there’s a warmth and endearing quality to their acting — it makes the movie better than your average drama. It’s not trying to push any boundaries technically or storywise, it’s just a straightforward tale to understand characters and their problems.

One of the features that diminishes its mass appeal is that it’s a fairly slow-moving flick, and despite its 2-hour running time, it feels slightly longer. For those that sit through this and pay attention, there’s a nice (not very subtle) “Oh!” moment by the end of the story.