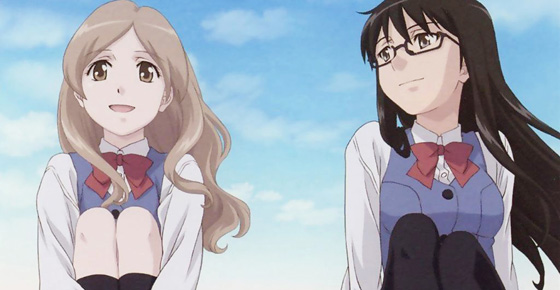 Based on the Yuri (girl on girl) manga, Sasameki Koto (Whispered Words) is the anime airing on TV Tokyo and online on CrunchyRoll [US only]. It tells the story of Sumika Murasame, an intelligent and athletic girl that is secretly in love with her best friend Ushio Kazama, who also likes girls, but never notices Murasame because she’s not her type, and she thinks her friend is straight.

Kazama likes tiny cute girls who wear kawaii dresses and colors – the complete opposite of Murasame’s tall and cool frame and strong personality, getting top marks in school and kicking ass in any sport, including basketball, volleyball and Karate. But none of that. Kazama is too self-absorbed to ever notice Murasame watching over her, or is too blinded by the cuteness around her.

They are joined by Miyako, an innocent-looking and clumsy girl – but don’t be fooled. She is in a relationship with Tomoe, an 18-year-old young woman who took two years off from school, and acts as a more insightful and mature view to “helplessly in love with the best friend” Murasame. All of them are joined by some other girls who are conveniently lesbians or Yuri fans, which is basically the same. Really, I’ve never seen one classroom with so many lesbians. And then there’s this boy who seems to like cross-dressing… funny, but there are times I feel sorry for him.

Overall, this adaptation seems okay. The art seems typical anime on television style, which isn’t a problem for me since I’ve grown accustomed to it. However, the story has a certain simplicity when dealing with these feelings, and Asia knows how to work with them, especially Japan and all these Yuri and Yaoi worlds. They can always tell these type of stories of friends falling for each other despite their gender. It’s either that or there’s a lot of wishful thinking from fans.

Sasameki Koto‘s story is cute, and funny – “weird” funny and “ha-ha” funny – and sometimes goes there with some drama or suggestive situations. It’s actually hard not to crush on Murasame, who excels at everything she does except telling Kazama she likes her… and cooking.