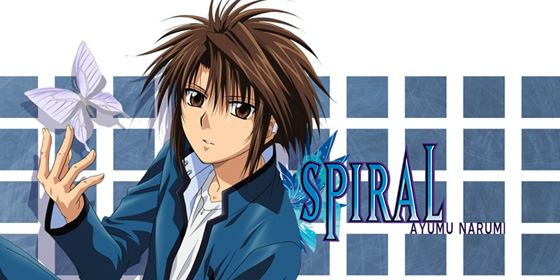 Based on the 15-volume manga of the same name, Spiral ~Suiri no Kizuna~ — sometimes translated to The Bonds of Reasoning or Bond of Inference — follows Ayumu Narumi, not your average high school boy. He’s assertive, quiet, and quite the piano player, but never wants to stand out because of comparisons to his older brother, who mysteriously disappeared two years ago after leaving a phone message talking about the Blade Children.

It is when a girl falls from the staircase of the fifth floor of the school and Ayumu gets accused of attempted murder that it all begins. Giddy student journalist Hiyono Yuzaki is on the case, while Inspector Madoka is called to the scene to investigate the incident, which leads back to Ayumu’s missing brother and the Blade Children mystery.

Like the title suggests, the show builds each case and solves them through logical clues, which Ayumu uncovers with some help of Hiyono and his sister-in-law as more murders, kidnappings and attacks occur. Despite the obvious comical side in Spiral, the show manages to weave suspense and thrill with all the cases that give a piece of the enigmatic puzzle. The show is also not about who did it, but more about how, why and what the heck the Blade Children are. That’s how they get you, so I’m not going to pretend to explain this to you.

Apparently the manga series gives a more complex explanation to what the Blade Children are, giving it science fiction overtones, which the anime series avoids. Instead, Spiral focuses on the idea of hope and shows the different paths that characters can take even if they’re supposed to follow the same destiny.

Each of the 25 episodes of 20-something minutes flies by. Considering there’s so much to tell, there’s never a moment to wonder when the show will be over, and once it’s over, you can’t help but get to the new one. The only valid criticism would be the lack of animation in this animated series. Because of its smaller scale, the series is plagued with a lot of still frames where there’s no movement at all, while the style of the show is quite minimal… it gives you little to stare at. But it makes it up with plot and interestingness.