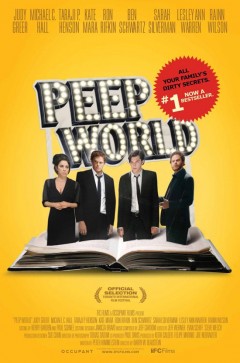 Barry W. Blaustein’s Peep World tells a short tale about a day in the life of a rich and wholly neurotic family that happens to be in the midst of preparations for the 70th birthday of the unloving and estranged patriarch (Ron Rifkin). A wrench is thrown into the mix when the youngest son, Nathan (Ben Schwartz), publishes a fiery exposé about each member of the family and tears them all apart right around the time that they are all expected to come together for a civil birthday dinner.

I must admit, the plot itself doesn’t seem so creative. As a matter of fact, I wouldn’t be surprised if you could name tons of other films with the same premise; maybe even down to the number of the birthday. Everyone’s family is somewhat dysfunctional, and even more-so with the added stress of planning an event.

But, I would also say that this simplicity may have been the backbone of the beautiful execution of the film’s presentation. Especially considering the inclusion of the comedic gems that are Sarah Silverman (The Sarah Silverman Program), Ben Schwartz (Funny or Die Presents) and Rainn Wilson (The Office). Other members of the cast include Judy Greer, Michael C. Hall, and the Academy Award nominated Taraji P. Henson.

I also noticed that the stunning depth of the characters added to the general magnetism of the story. I felt like  I had known each of these people since the day I was born. This is because the characterizations are so applicable. There’s a black sheep, the histrionic prima donna, the well-behaved one, and then the youngest son whose been striving for excellence and attention his entire life. The experience is a little bit like looking in the mirror.

But the thing that stuck out to me the most was the Arrested Development, Ron Howard-esque narration that ran throughout the movie. It seemed to be slightly crippling in the early points of the movie but it became more relevant quite quickly and made things hilariously clear. It was an incredibly charming addition that definitely worked out for Blaustein’s film.

Although the progression of the film was predictable, it was done in such a smart and thoughtful way that it satisfied every facet of its humble intentions. At one point in the film I was nearly on the verge of tears. To think that those tears could be caused by a line delivered by Rainn Wilson — “Never in my wildest dreams!”, I would’ve said; but Peep World is clearly a manifestation of my wildest dreams. I’m almost positive that it can be that way for you too because if that doesn’t strike you then I can think of a scene, involving karma and an erection that overstayed its welcome, that most definitely will. Peep World is a fun and clever comedy about the naked truth that is definitely worth a peep.

Peep World opens in limited release on March 25th and can also be viewed on iTunes.