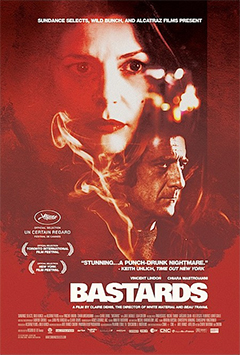 A director like Claire Denis is a rare one; a filmmaker who loves to introduce scene after scene without giving the audience an ounce of information to properly place said visuals. To some, this is brilliant. To others, this is frustrating. In all reality, it’s exactly this style of storytelling that makes her, and her latest film Bastards, so damn interesting.

Denis opens the film by disorienting, introducing us to a series of characters through quiet, moody visuals. As usual, she revels in silence – as well as that good old mesmerizing Tindersticks music – allowing the visuals to tell her story better than any words could. By no means does she keep things hidden for good, and those unwilling to hunt for context clues soon discover exactly what’s going on. Marco (London) has returned home after years of living as a naval captain in order to help his sister Sandra (Bataille), whose husband has committed suicide and has recently discovered that her daughter Justine (Créton) was sexually abused by powerful businessman.

If it sounds like a lead-up to a vengeance film, it’s because it’s presented that way, but that’s far from what Bastards truly holds. Simultaneously, a sexually-charged noir tale begins to unfold between Marco and his neighbor Raphaëlle (Mastroianni). Passing glances quickly turn to torrid affair, but no budding romance in a noir film can be free from trouble. The cold reality here is that the man Sandra blames for her husband’s death and her daughter’s abuse, Edouard Laporte (Subor), is the same man who keeps Raphaëlle as his mistress, with a child of their very own.

To call this film dirty would be almost too kind, but that can be said for much of the filmmakers work. Denis never recoils from the human body, appreciating it in its most sensual moments while bluntly presenting the implications of assault against it through bloody objects and cum-covered couches. It’s harrowing, but depicting humanity’s dark side is something the writer-director has always been fond of. By only giving glimpses into the less-savory aspects of these characters lives, the audience is left in the dark, forced to imagine whatever cruel acts of violence may have gone on themselves.

In the dark is where Bastards truly flourishes. In the dark is where the violence and sex that kicked off the film’s events came to be. In the dark is where the haunting realities of those events are revealed. In the dark is where actors Vincent London and Chiara Mastroianni, live and breathe, impressing with their intense silences and emotional outbursts. And as appealing as the film’s look is from start to finish, there’s something all too intoxicating about the scenes shot in that same darkness. There’s nothing too shocking to present on screen, and frequent collaborator/director of photography Agnès Godard knows that well, yet again capturing the color of blood in the most frighteningly beautiful ways.

As beautiful as it is to watch most scenes unfold, not all of them necessarily provide more pieces to the puzzle that is this film, nor glue to hold those pieces together. While its first two acts are fairly strong in establishing Denis’ mystery, the last third loses itself with ill-paced scenes, more fragmented than anything that came before. In fact, it almost turns into something too ridiculous for its own good, delivering content that doesn’t feel satisfying by any standard. Regardless of its flaws though, one thing is certain: Claire Denis has made a film truly dedicated to emphasizing that the people within it are exactly what the title states.