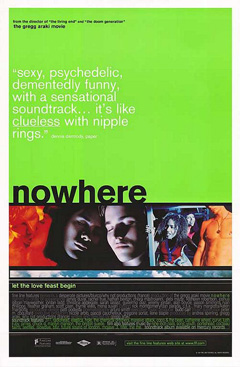 Thanks to From the Depths of DVD Hell and MUBI.

What the hell did I just watch?

Watching Gregg Araki’s Nowhere was… a surreal experience to say the least. Half the time wondering what was really going on, but being unable to take my eyes off of the screen, Nowhere is plagued with tons of people you may recognize one way or the other — including a cameo by Staci Keanan and a prominent supporting role for a super skinny Guillermo Diaz.

Nowhere follows Dark Smith (Duval, Frank in Donnie Darko), a young camera aficionado who’s looking for someone to love. At first, he believes that person to be his girl, Mel (True), but sexuality is so fluid that Mel seems a bit more interested in her girl, Lucifer (Robertson).

The gang is trying to get by in their boring existence with some drugs and alcohol and the occasional purging for a group of girls that includes braced-teeth Dingbat (Applegate), who seems more interested in whom Ducky (Caan) has slept with.

While Dark Smith tries to figure out what Mel is all about, there’s green/blue-eyed Montgomery (Bexton) to make things interesting.

Nowhere feels a lot like Donnie Darko — or I guess, Richard Kelly intended Darko to feel a lot like Nowhere — besides the Duval connection. Both films are about a group of people connecting in different ways through strange happenings. There’s also a motivational speaker involved — played by the late John Ritter in here.

However, what Araki’s story is lacking is an actual cohesive line to follow. Not many problems with that, though. The film is out there enough to keep you wondering what’s really going to happen there. And trust me, ANYTHING can happen in this movie.

Nowhere looks a little bit dated, but still feels like the 90s in aesthetic — I couldn’t understand half the teen dialogue there. Maybe I just have issues understanding teenagers because it’s a recurring issue of mine when watching films. In any case, there’s not much exploration of LGBT themes here, the sexuality is more like a non-issue, and people getting together felt natural (really weird, but natural nonetheless)… though, Dark Smith does get a little mopey when his “relationship” with Mel goes, well… “nowhere.”

That ending… that ending scene is probably already a cult classic, and worth your watch.