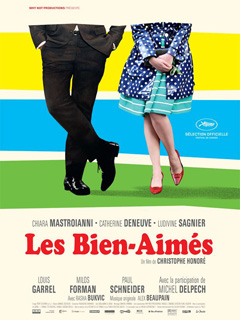 As it opens with a French cover of These Boots Are Made for Walking in a colorful shoe store, it’s easy to assume that Christophe Honoré’s new musical Les Bien-aimés will be a bundle of light-hearted fun. The reality is that this film is far from fun, as it quickly descends into dark territories that one doesn’t always expect from a musical.

The film begins by introducing audiences to Madeline, a young woman who meets a doctor and falls in love while working as a prostitute. They marry, they move, they divorce, and she moves on, remarrying and raising their child in peace until he returns out of the blue to begin an affair that would last a lifetime.

Thirty years later, her daughter Véra is all grown up and having relationship issues of her own. On one hand, she has a protective on-and-off lover who she works with, and on the other a bisexual musician from America.

Les Bien-aimés spans several decades and countries and tries hard to keep track of its wide ensemble cast, but there is ultimately more stuffed into over two hours than it can handle. Honoré’s attempt to capture the essence of extremely different periods while tackling heavy subjects like prostitution, depression, sexuality, and even HIV and 9/11, leaves the viewer wishing there was much less for them to try being invested in.

There’s an obvious struggle for the audience and director to handle such a large cast, especially when the film has characters like Louis Garrel’s Clement, who was entirely unnecessary no matter how handsome he may be. Many characters also overstay their welcome, like Paul Schneider’s sexually confused mess of a man, regardless of an impressive performance. If only the music were at least great enough to carry the whole film, but only a few songs stand out while the rest quickly fade from memory.

This isn’t to say that it’s all bad, as there’s still plenty of good stuffed into this bloated musical. Ludivine Sagnier and Radivoje Bukvic’s sexual chemistry helps the first act plenty, and very strong performances from Catherine Deneuve and Chiara Mastroianni are a major benefit to the latter half. Some scenes touch on some very tender mother and daughter moments, notably a duet titled Une fille légère.

Much like Honoré’s first musical Les Chansons d’Amour, there is something about the way he works the camera as his actors are strolling around beautiful night scenery that makes these movies worth watching. One moment that truly showcases this is when Mastroianni storms off while Schneider follows closely, both singing Ici Londres.

While Les Bien-aimés may echo Jacques Demy’s Les Parapluies de Cherbourg at times, it is far from being the great musical that Honoré’s first was, leaving it as a somewhat disappointing and ultimately average movie.