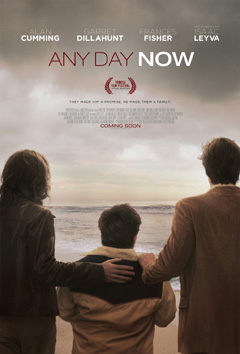 In the 70s, a boy with Down Syndrome is taken care of by a gay couple, who decide to love him, feed him, give him an education and a place to live until he’s mess of a mother is released from prison. It almost sounds like TOO much, so it’s surprising (or maybe not) that Fine’s story is based on real life, and that the struggles of gay couples to be considered apt for raising a family still happens today.

Rudy lives at a pretty lousy place where he’s late on the rent, and has obnoxious neighbors. When the woman living next door is arrested for drug possession (or dealing, can’t remember), her son with Down syndrome — a boy named Marco (Leyva) — is taken by social services. Without being able to adapt, Marco escapes and returns to an empty home and is discovered by Rudy, who takes him in instead of calling social services once again.

Making use of his new friendship/relationship with Paul, they both decide to ask for legal permission from Marco’s mother for Rudy to take care of the boy until she does her time. As a way to assure the legal system that Marco will be provided appropriately, Paul suggests Rudy and Marco move in with him and that’s how life for the three of them begin.

While the strongest feature in Any Day Now is its story and the discussion that might arise from a viewing of it, it ends up being a fairly run of the mill drama. The acting is solid from Cumming, while Dillahunt does his best with the constrains of his character… though my mind did kind of put him back into his Raising Hope character at times. Visually and aesthetically, it starts to blend in with the neverending list of other dramas around the globe, while the pacing is excruciatingly slow and angering due to the situation the characters are in, despite the speed in which Paul and Rudy’s relationship develops.

Though the themes and situations dealt in the film are causes that I care for, and I personally felt disheartened at the reality of the film, I’m a bit more interested in seeing what people who are against gay marriage… and most importantly, adoption from gay parents, think of the film, and if they think this is propaganda.