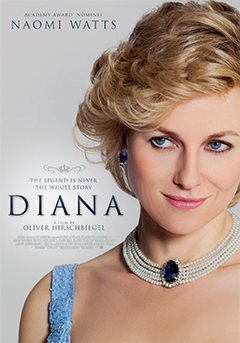 There’s something about the lifestyles and romances of people in the public eye that people find oh-so fascinating, especially when they come in the form of a period piece. The world is no stranger to films focusing on famous figures and their scandalous affairs; just look at the recent works My Week With Marilyn and W.E. about Monroe and Wallis Simpson respectively. The sad fact though is that most of these films, frankly, are not that good.

Enter: Diana, The People’s Princess. A woman once so loved by the world at large even though she was considered an embarrassment by her family. Now, over a decade and a half after her death, comes a tell-all film about her tumultuous relationship with the heart surgeon Hasnat Khan in the last years of her life. One might think a film about the Princess of Wales might actually be something rather interesting. There’s a lot to focus on when it comes to her family, her husband, and her humanitarian work, but Stephen Jeffreys adapts Kate Snell’s supposed biography to play out like something you might find in a trashy romance novel. Seriously.

Not including a brief awkward scene of Diana pacing through her home minutes before her death – which all but screams at you that there was some weird horror, conspiracy vibe surrounding it by using tracking shots and faux security camera footage – the film literally kicks off by introducing Naomi Watts as a jilted lover. I say Naomi Watts because, outside of the fact that the names Diana and Charles are involved, this movie could pretty much be transposed to any rich and famous person in a romantic drama, real or not. It’s actually rather embarrassing to witness an actress with as much talent as Watts reduced to delivering lower-tier romcom dialogue at times, but she does it anyway. As a matter of fact, the film could have just as easily been named “The Naomi Watts Cries Show” and I would have potentially been happier. I digress.

After spending a whole bunch of time talking to herself in front of the mirror, Diana visits a friend at a hospital, only to have literally every single person there react in shock when they see her. We get it Hirschbiegel, she’s famous. But wait! One man – no! one heart surgeon! – doesn’t care that she’s famous. That man is Hasnat Khan, played by Naveen Andrews who looks off into the distance longingly way too often, probably wishing he was back on Lost. Once you see them flirting in the elevator, you realize that this movie is quickly becoming a bad romantic comedy. And it does! They start talking about jazz and there are a lot of close-ups of Andrews smoking, and within minutes the film segues into a terrible wannabe nineties edition of Mad Men set in the UK. It’s nice to look at, something particularly special considering how bad nineties fashion is, but just because these actors are nicely dressed doesn’t mean they’re worth looking at.

But there’s one big problem with their relationship – aside from the sweeping romance it wants to be actually being incredibly manipulative and emotionally abusive in general – Khan likes his privacy! With all the paparazzi following Diana around during her separation from Charles, she has to figure out a way for their romance to go on. After all, she’s a princess, so she’s got to have a secret superpower, right? Guess what? She does! Diana puts on a wig and, suddenly, she has a brand new hairline and not a single person notices who she is. She’s just like Wonder Woman! Trying to hide from the tabloids pretty much destroys the couple, and the rest of the film basically devolves into a constant will-they or won’t-they situation that makes a strong case for Diana and Hasnat to win the Worst Screen Couple Razzie.

Where this detrimental romance is the main focus of most of Diana, there are a couple of scenes dedicated to showing her humanitarian efforts. They are few and far between though, as the film is all about the drama and the romance. “My whole life is dramatic,” Watts utters at one point, and she couldn’t have said it better. Oliver Hirschbiegel’s miserable film is nothing more than a bloated, nearly two hour exposé about how melodramatic Princess Diana’s life was.