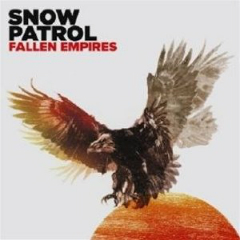 Fallen Empires is total chill music. The album as a whole has a folk feeling to it mixed with an oldies rock vibe. In sections, it’s a bit of a slow album with more of an indie-experimental sound than a rock’n’roll sound. I can see this music being perfect for movie inserts and would expect to hear it while sipping on a Soy Chai Tea Latte at my favorite coffee place.

Now, let’s do my favorite music exercise. Close your eyes and simply listen. Soak up the rhythms and the lullaby vocals. What do you see? In Fallen Empires I see sunny hills and golden fields of pasture. I can feel swift gusts of air that carry clear oxygen. It’s a timeless feeling of glory. I especially feel this with This Isn’t Everything You Are. Like this one, certain songs in this album can be described as empowering.

The Garden Rules is one of those songs that gives this album that folk flair. It comes as no surprise as it features American folk-rock singer Lissie. She is also featured in Fallen Empires and Those Distant Bells, both of which I recommend.

I can’t finish this review without writing about the album’s title song, of course. Compared to the rest of the album, Fallen Empires has a bit of a darker feel to it. The guitar riffs are low and eerie; the drums are steady most of the song. The vocals are also vexing—quasi reminiscent of Celtic pagan chants. This is one of my favorite tracks on the album along with Called Out in the Dark.

Although I wouldn’t say Fallen Empires is an album for everyone, I have to say it’s full of beautiful music. It may be too ‘chill’ for some, but if you’re into that, then I do recommend it.

Preview it in Xiami.com | Like it? Buy it in Amazon.co.uk | Amazon.com | Universal-Music