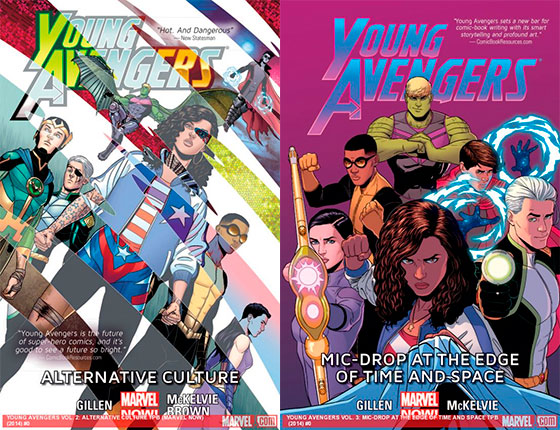 – Am I the only person on the team who’s straight?
– Princess. I’ve seen the way you look at me. You’re not that straight.

And so the story of young adult superheroes ends for now. With a story that was more intimate and personal that all of the previous Young Avengers adventures. Instead of being part of either a big event or having many of the other Marvel heroes in the story, this is a story where adults are not reliable, and they have parent issues and relationship issues. Also, it seems all of the current Young Avengers are either gay or at least bicurious~

So, where did we leave our young heroes last time? Oh yeah, they have managed to find a temporary solution to all of their parents out for their blood… by being as far away as them as possible! Issue #6 starts in a very different place with a very different artist. We have Kate Brown illustrating the adventures of Speed and Prodigy in a very mundane line of work. Speed was part of the original line-up of Young Avengers, and Prodigy used to be a mutant on the rebel side of things. One is super fast, and the other used to absorb the knowledge of every people he met; he can’t anymore but he still retains the info. In this issue they bond and are after a weird dude dressed as Patriot, another former Young Avenger. And I give kudos for Gillen for making so much happen in such a short space, and Brown for making them look seriously pretty. By the end of the issue something happens to poor Speed, forcing Prodigy to find the Young Avengers and have them all check what the hell is going on.

Issues #7 to #15 show the team traveling through the Multiverse seeking this not-Patriot, and fighting/hiding from Mother, the interdimensional parasite who still wants Billy’s power. But now Mother has help! And it someone from Loki’s past, as well as the scorned exes of the Young Avengers. Because that’s how Mother rolls.

By the end of it all, most of them will learn things the hard way and will grow, sometimes literally in the case of Loki.

Like the first issues, these ones have many geek references, social media uses (we have Instagram!) and interesting turns of phrase. Also McKelvie’s art still complements Gillen’s love for breaking the fourth wall, and they way they travel through the Multiverse is a joy to watch and something that can only be achieved in comic-book form. Also, the last two issues are more of an epilogue (a literal “after party”), where you can see what has become to all the main players in the story, and it has a lot of guest artists that give it a unique feeling, even if not all of the art is great.

So yes, the 2013-2014 run of Young Avengers is worth reading, even if the second and third volume are not as great as the first. It’s still a great tale of growing up and relationships while doing some kick-ass heroing. And, come on, just look a these precious (not) babies: 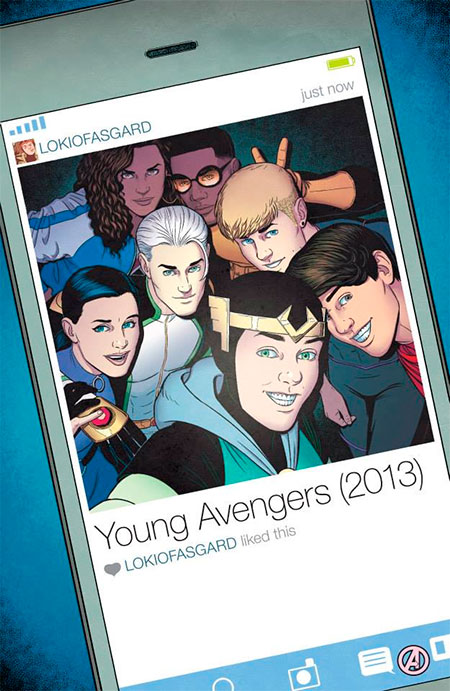