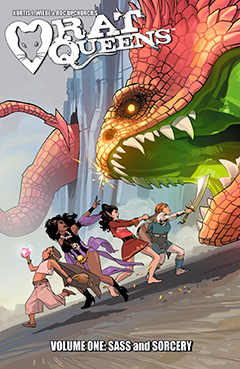 Yep, it’s “Lord of the Rings meets Bridesmaids“. Writer Kurtis J. Wiebe described the concept of Rat Queens just fine! And if that doesn’t make you want to read it, then you are one tough cookie! So I will try my best:

The titular Rat Queens are a questing party of the Medieval fantasy town of Palisade, and it comprises rockabilly elven mage Hannah, hipster dwarven warrior Violet, atheist human cleric Dee, and the hippy smidgen (Hobbit?) thief Betty… and they are the coolest most-kickass group of girlfriends ever!

What I like most of Rat Queens is of course the Rat Queens. Each lady has their own personality and each of them are pretty much an individual, and not only because they are different races. And sometimes they clash and banter. As BFFs sometimes do. But that doesn’t matter because they clearly love each other very much. It shows in the paper. Even when Hannah is irresponsible, Violet too violent, Dee socially awkward, and Betty likes candy and drugs a tad too much~

Oh yes, there’s a lot of drugs, booze, swearing and sex in this. But nothing too explicit except for the swearing. The violence is way more explicit. Because artist Roc Upchurch is not afraid to hurt these women (or any character actually), which is logical since they lead a dangerous life, and the result can be quite gory. 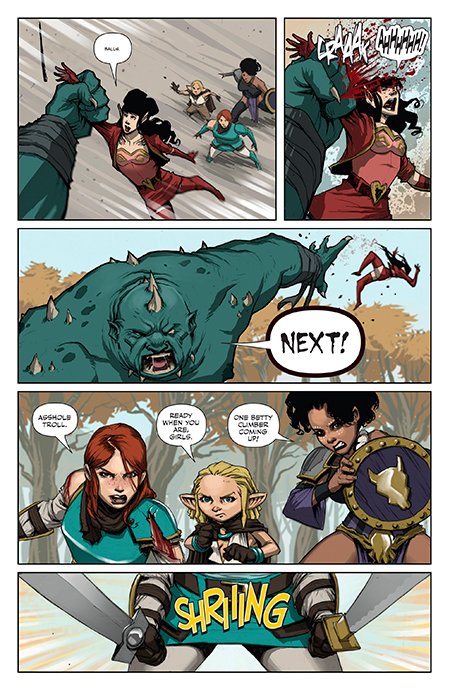 The supporting cast is also great, specially Sawyer Silver, a town official “with a past” and a tempestuous relationship with Hannah. We also have Braga and Orc Dave, and damn, who would have though that my favourite supporting characters will be orcs? Orc Dave is named such because he’s part of the questing party Four Daves comprised of a human, a dwarf, a smidgen, and said orc… all of them named Dave. Braga is one of the remaining members of the questing party The Peaches, whose leader, the elf Tizzie, has a rivalry with Hannah.

Finally, I appreciate that the cast is not fully white, with lots of people of color, including Dee, or fully straight, with some LGBT characters, including dear sweet Betty and her love interest Faeyri.

Rat Queens is a fairly new comics, and maybe it is too soon to tell, but none of the issues have disappointed, and with the news of a possible animated series, I hope this band of sisters have more adventures to come.