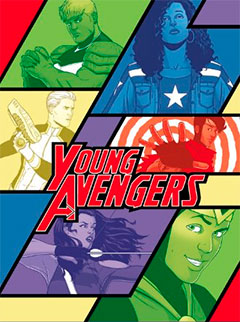 In 2012, Marvel Comics gave us Marvel NOW!, a relaunch of several ongoing comic books. That means several comics restarted with a #1 issue. Amongst them was Young Avengers.

The story starts with Hawkeye, but not the Avenger; this Hawkeye is a teenage girl named Kate Bishop. This Hawkeye wakes up on a spaceship after a one-night stand with a beautiful alien boy and decides she won’t feel guilty about it. Said beautiful alien boy is Noh-Varr, also a superhero, a hedonist and a bit of an Earth fanboy. And then Skrulls attack and Hawkeye is having the time of her life and recommends everyone should try being a superhero. That’s a cool intro as any for a comicbook. But the story is not about them. Or rather not only about them.

In New York, Hulking and Wiccan (or Teddy and Billy for friends) are having a discussion after Billy discovers Teddy hasn’t stopped heroing as they promised. Teddy points out, after a heart-wrenching confession that he fell in love with a superhero. Billy realizes he cannot change Teddy’s (or his own) nature and promises he will be the best boyfriend ever, and they kiss. Yes, they are freaking cute. And then Billy does something he shouldn’t have.

On a nearby diner, Kid Loki realizes there’s a disturbance in the (magical) force and goes stop what Billy is up to. Miss America Chavez appears to stop Kid Loki instead, because she trusts him as far as she can throw him. Which is a terrible expression in this case, because Miss America Chavez is flying superstrong interdimensional Latina. In the brief fight that ensues, Billy manages to finish his spell… and Teddy’s dead mother is here. Billy was browsing dimensions until he found her just seconds she’s about to die to bring her back to Teddy. There’s hugging and happiness… until it turns out this mother is not Teddy’s mother but actually an interdimensional parasite that wants Billy’s power. And to aid itself, it controls parents’ minds, and brings dead parents back to life and also controls their minds.

Yep, that’s something else.

So what I love about this comicbook? So many things! I love its healthy views of teenage sexuality and love, the geekiness complete with Game of Thrones and Terminator references, the Tumblr parody in the recap page, how female gaze-y it can be where Noh-Varr is concerned, and they are all together thanks in part to Kid Loki. Which is nice considering that Loki was the reason the Avengers were formed originally.

Also, this Young Avengers relaunch continues to be as LGTB friendly as the previous one, showing Billy and Teddy as a realistic young couple, where they have their insecurities but they are so clearly in love. They are also huge dorks. That’s why it hurt me when Kid Loki implied that Billy’s reality warping powers could be a reason they were so perfect together. They are a very lovely daydream, indeed. There’s also the fact that Miss America Chavez has/had two flying superstrong interdimensional Latino moms; which Kid Loki cutely calls Amerimoms.

But as much as I adore Kieron Gillen’s awesome writing, I must also comment on Jamie McKelvie’s art. I must confess that I wasn’t a fan at first. I was totally spoiled from other artists thanks to Jim Cheung who beautifully drew Young Avengers‘ previous adventures. But McKelvie’s style grew on me, especially the creative way he constructs his panels. In fact, this is where he won me over: 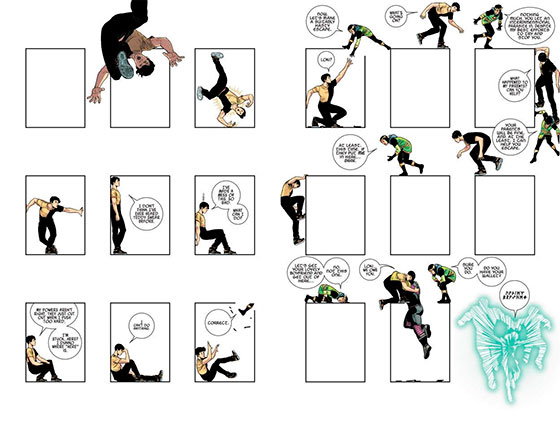 So yes, read Marvel Now! Young Avengers. It is entertaining, funny, poignant and full of action. Also very nice to look at. And since it’s an ongoing comic, there’s much to come with new exciting adventures and new (and old) members joining the team. You don’t even need to read the previous Young Avengers comics to understand what is going on, but if you have the time, I promise those are awesome too.