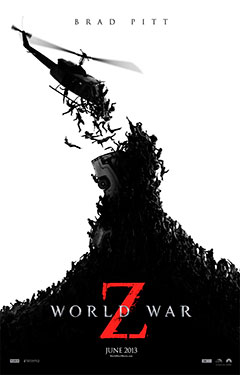 World War Z is the most PG-13 zombie movie I’ve ever seen, but that doesn’t necessarily make it a bad movie.

After some footage and a voiceover about a new disease, we start with former United Nations employee Gerry Lane (Pitt) having breakfast with his family and watching the news in their home in Philadelphia. Things don’t look good, but apparently it hasn’t affected them yet. That is until, they go outside and get stuck in the heavy traffic. Then zombies attack and there’s panic and the family narrowly escapes through a combination of Gerry’s survival skills, quick thinking, and a timely helicopter sent by Thierry Umutoni (Mokoena), Gerry’s friend and Deputy Secretary-General of the United Nations. After that, the family, that consists of Gerry, his wife (Enos), two daughters and a boy they managed to take with them, arrives to a U.S. Navy vessel. Inside, Gerry will be recruited on a team to find the origins of the virus in order to make a possible cure. From then on, things will get worse before they get better.

World War Z is supposed to be based on the book of the same name, but besides the dialogue between Gerry and Mossad leader Jurgen Warmbrunn (Boeken) which was practically taken from the book, there’s not much else. Sure, there are hints here and there showing the scriptwriters at least skimmed it, but in general the movie “betrays” the theme of the book in three main issues. First, there’s no protagonist in the book, and while you could argue that this could be a side story about the events that happened in the “zombie war”, there’s no story like Gerry’s and that’s linked to the second point. In the book, there was no cure and the humanity had to make do with different tactics in order to survive after great years of suffering. And third, the zombies in the movie are freaking fast and not the shuffling Romero-like ones we get in the source material. It’s that superhuman agility that created more drama about certain city that didn’t have that fate in the book.

But, was World War Z a bad movie? Not at all! I will argue that it’s even pretty good. It’s just not a very good adaptation. It’s also not quite your usual zombie movie, more like a disaster movie with some drama. In fact, even the attacks from the CGI zombies were mostly bloodless. Still, that doesn’t make it bad. Mostly, because it’s very character driven and all of them were fairly decent characters.

Gerry is a compelling protagonist and uses all his skills to survive and complete his mission, not only to give mankind a fighting chance but to reunite with his family too. He also has almost Sherlock-level observation powers. He also managed to get a companion of sorts at the last part in Segen (Kertesz) an Israeli soldier who’s very helpful and quite kick-ass despite her petite size. All the other actors did a fine job, but they didn’t have much time to shine because of the fast pacing of the movie. And boy, was it fast. Nothing against the edition, it’s just that is so entertaining that the two hours flew past and left you with a “that’s it?” sensation. Good thing they are going to make a sequel.  And maybe now we actually meet more characters from the book and we can see the individual struggles all over the world.

As an extra, let me tell you I watched this movie in 4DX, and while it was just the movements I felt (that is, no wind or water), there was a lot of those. Especially for all the planes, cars and zombie fights.