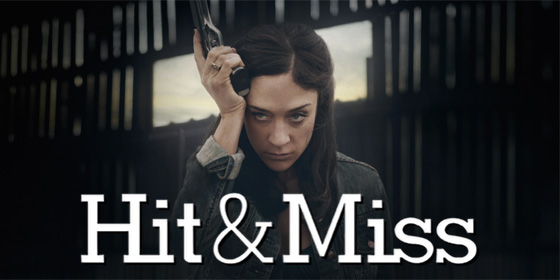 The commercial runs, Chloe Sevigny is reading a letter and -somehow surprised- tells us that she has a son. Well, isn’t it weird? If we needed it to be clearer, Sevigny’s character knocks on the door and tells us she’s the boy’s father. Of course I need to watch the show.

Hit & Miss is a 6-episode British show that aired on Sky Atlantic last year — it’s about to air in Latin America through Cinemax — following the life of Mia (Sevigny), nee Ryan, a male to female (MTF) transgender person who happens to be a hitman. Mia seems to be a very reliable hitman, one of the best if we’re to belief her boss Eddie (Peter Wight). Very much like Leon did, Mia leads a simple no strings attached life- she has no family (or no contact with them), she has no friends, no social life. Mia lives for her job, which gives her the money to pay for her transition. Currently, she’s saving up for her bottom surgery (is this what it’s called for MTF gender reassignment operations?).

Out of the blue, Mia gets a letter from someone in her past, a woman named Wendy whom Mia used to be involved with when she was still a man, who informs her that she’s dying of cancer and that Mia fathered a child, who has been named after her male name: Ryan (Jorden Bennie).

However, the transition from hitman to parent isn’t smooth and all sort of frictions arise with Wendy’s other children — especially the older ones — 16-year-old Riley (Karla Crome) the eldest daughter, Levi (Reece Noi), and the youngest kid Leoni (Roma Christensen). Hit & Miss basically chronicles Mia’s road to take the responsibility of her step-children, find a connection with her son, dealing with the issues of her past, a new relationship with Ben (Jonas Armstrong), and –inconclusively– try to balance her family life with her job, which turns messier and messier when John (Vincent Regan), the prick, takes an immediate dislike towards her.

There’s a LOT to like and dislike about the show, though, the acting is great especially on behalf of Sevigny and her on-screen son Jorden Bennie, who REALLY tries to connect to his transgender father throughout the whole series, Hit & Miss suffers from lack of focus. It bothered me quite a bit when they added Ben Crompton as “the creepy dude who was more than just that” Liam, who ended up being the resolution to the conflict in Riley’s pregnancy storyline. So he was in it to take the blame, why not just ditch the storyline? There were enough parallel storylines already, and theirs was already wrapped up to give way enough time for Mia’s relationship with her “old” family, who magically showed up on the last episode, never leaving enough time to explore. Yes, Mia is effed up in the head- not because she is a MTF, but because her father was a violent person.

Though Hit & Miss never uses sex in a tantalizing way — except when Mia wants to make a point about how sex with a transgender woman would be like — the show is a bit graphic with scenes of stark naked Sevigny that may bother some audience, as well as quite a bit of graphic violence. After all, Mia IS a hitman, though she gets sloppier and sloppier as the show progresses.

Also, it makes NO sense that she had all that dough lying around and couldn’t afford her surgery. How much is surgery in the UK?

Extra quarter of star for the acting.