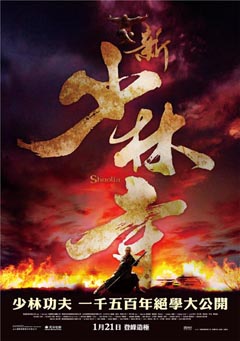 Set during the early days of the Republic of China, when the country was fragmented by foreign powers and warlords fought each other for land dominance, warlord Hou Jie (Lau) defeats his enemy and manages to mock the monks at the Shaolin temple who tried to intervene.

With new land and new riches, his frenemy “brother” Song Hu, now old and not able to fight back, suggests their kids get married. Hou’s right hand aid Cao Man (Tse) plants the seed of distrust and gets Hou to set up a trap against Song Hu. However, Cao has other plans for Hou.

Shaolin is formulaic, but it works fine. Andy Lau plays a general who falls, or gets taken down, from grace. Nicholas Tse plays the good for nothing “right hand” of the general, never measuring up, and wanting it all at any cost. It’s supposed to work like a vengeance film in parts. There’s a lot of paying to do, but it comes with the pacifist, non-pacifist message from the monks.

These monks are good, but if you threaten them, they fight back. And boy do they fight. Jackie Chan plays the cook at the monastery, so imagine the actual fighting monks. The film has all these odds going against the good guys, and we are told not to retaliate… just to keep on going.

It’s satisfying in a different way, as it is unsatisfying because there’s no bloody payback.

The film is a well-handled big Chinese/Hong Kong production. There are big epic fighting scenes with sweeping shots. The acting is good, though it feels that they wasted actress Fan Bing Bing, playing Lau’s wife, in the process. Shaolin has enough drama and some bits of humor to be more than just an emotionless action drama.