She’s given the world some truly inspired electronic-infused soul ever since. She’s worked with Cliff Lin, a man known for his aggressive, pulsing compositions (having created the music behind Black Ops and Black Ops II, games in the Call of Duty franchise, The Green Lantern, and film Prometheus). Though he managed to temper the epicness of his own music, none of the grandness was lost when he worked with Neon Bunny on her critically acclaimed Seoulight. As it turns out, she’s got friends in very high places, as many of her collaborations were the result of mutual friendships in the industry: “He was just my friend’s friend. I knew he is really great at every style.”

In fact, her one-time stint in drama land in Shut Up Flower Boy Band was the result of her coming to the rescue of a friend in a pinch: “That only happened because the director was my friend’s friend. They just needed any type of band in an emergency. So I said, okay.” Though she’s not in the market for more acting roles, she wasn’t prepared for the attention her appearance received: “Actually I was kind of surprised because a lot of people had seen that drama and e-mailed me. And I just thought, oh, I was very lucky!” She takes all this in stride, of course, her ebullient smile and easygoing demeanor radiant even in the muggy predeluge. 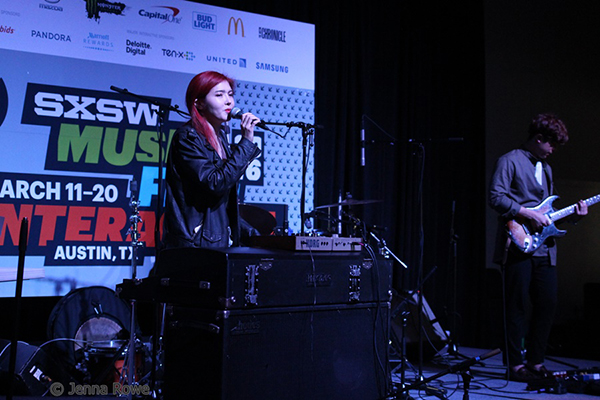 She’s an artist’s artist, however, and she always has her eye on more ways to expand her sound. That also allows room for more collaborations in the future. She reveals an artist she’s particularly interested in working with; however, with all the madness surrounding 6th Street and her soft-spoken nature, it’s hard to exactly make out who she says. Perhaps Lensko, a Norwegian teen who’s made a name for himself with his techno-house beats. “I’m not sure if it’s ever going to happen, but I’m a really big fan of his.” Musing on the possibility of that connection, we all get really excited, Neon Bunny even saying, “I should send him an e-mail!”

She even got a chance to take a break from SXSW and see New York hip-hop outfit, Flatbush Zombies: “I saw them, and I was like, ‘wow!’” So perchance another collaboration in the works there?

It’s not hard to see how personal her music is. There’s such a beautiful croon and ache in her sound, it’s hard to not see something deeper there. She would absolutely agree: “The latest one, Forest of Skyscrapers, was kind of really my story. Usually, singer/songwriters, they don’t write their own story. Sometimes they do. But Forest of Skyscrapers was really my story.”

For many musicians, it’s not enough to sing their stories; they sometimes get those stories etched in their skin, taking messages, memories, and thoughts with them everywhere they go. Just for kicks I wondered if she had any tattoos and if not what she’d like to get if she ever got the chance: “Well, I don’t have any [tattoos], but if I ever had children, I’d tattoo my children.” She’s quick to clarify, “I don’t have any. Not yet. Not too soon.” We share a giggle. This isn’t a woman focused on raising a family just yet. She’s still got so much she wants to explore musically and offer her fans. In the future, she says her fans have one thing to look forward to: “Fun!” She muses, “I’ve been releasing kind of really slow stuff. And some of the fans are sort of moody about it. I can’t help it, but there’s gonna be fun songs. (Camiele: More upbeat, summery type songs?) “Yeah!”

As our interview came to a close, me being desperate to get her back inside the Majestic (the setting for our interview and her performance at the Seoulsonic showcase) before it started to pour, she expressed her desires for the near future: “I hope I can come back for a US tour. Because I have a European tour in June. So it would be really exciting to come back for a US tour someday!”

Admittedly, I was a bit hesitant to interview her because of the craziness surrounding us—we had to step outside into the melee of humanity and noise that was 6th Street, and as I mentioned before, it was about to rain. But she was gracious and kind enough to answer all my questions honestly… and even forgave my sad attempt at reading Hangul. I was fascinated with her musical vision and even more enchanted by her inviting personality. Truly a gift to be able to meet and chat with this brilliant artist.

You can find out more about Neon Bunny on her Facebook and follow her on Twitter and Instagram. Please purchase her music on iTunes and YesAsia. You can purchase her award-winning Seoulight at Synnara.