And wouldn’t you know it, the night when SXSW is reaching its zenith, the sky opens up and a thunderstorm threatens to blow everyone away. Never mind the swarms of bodies all converging in 6th Street, we were all hoping to find some place that would let us in away from the impending deluge. In the middle of all that, a sweetheart emerges and takes time out of her sound checking to chat with me. 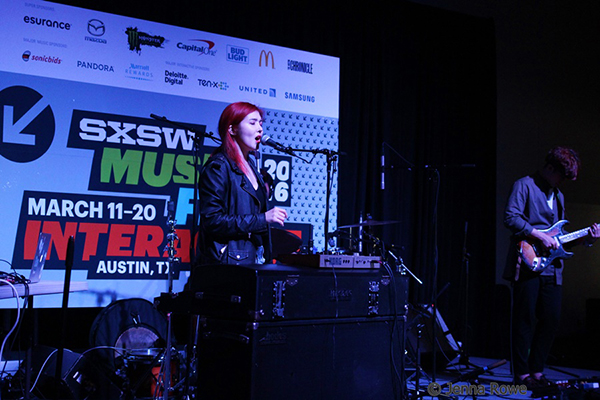 Neon Bunny is a name synonymous with the mystique and charm of Seoul, South Korea. She captures the essence of the city with her smooth electronic-inspired pop. She’s garnered national and international notoriety, having won Best Pop Album for her highly acclaimed debut Seoulight at the 2012 Korean Music Awards, performed at the Busan Rock Festival, and appeared in Korean drama Shut Up Flower Boy Band. Beyond that, she’s worked with some brilliant musicians and continues to transform, pushing her sound and exploring the depths of who she is and what her music can do to express that. That alone was enough to get me excited to chat with her.

As in her music, she’s incredibly honest when expressing herself. When asked how she felt about her time in Austin and at SXSW, she answered with the energy I’d come to realize was the hallmark of her personality: “Really amazing! I’ve never been to this kind of festival. Seoul has a festival, but it’s really small. And all Korean. It’s really diverse here. It’s really amazing. And hot,” she says with a laugh. Even with the threat of rain, I had to agree about the heat, made even more stifling with the moisture thickening the air.

Having heard much of her music, and particularly noting the shift after her stint in Boston in 2012 from fluffier pop to more soulful electronica, I was intrigued to know what inspired her sound… and was actually shocked with the answer: “Mostly reading books inspired me to start writing music. I got inspiration not from other musicians. If I write a new song I go to a store and get a new book.” Though not necessarily unexpected from an artist, it was quite an interesting response. Of course, when she revealed her current favorite wordsmith (“Recently I’m reading Japanese author Natsume Sōseki. [He’s] Shakespeare in Japan”), everything became clearer. A musical poet influenced by an author considered a poet in his own right.

If one pays attention to the timbre and tone of her more recent music, particularly tracks Forest of Skyscrapers and Romance in Seoul, they can definitely hear the inherent poetry in the musicality. Of course, knowing her background in jazz, being the daughter of a jazz musician, it’s no surprise, really, the depth in her music. When asked if it was her intent to try to inject some jazz into her sound, she answers, “I’m trying to. As a chord progression, I’m trying to make it like jazz.” However, she reveals, “Thing is, I grew up as a jazz club daughter, but I’m not really great at jazz at all. It’s sad.” Her almost self-deprecating humility is unfortunate when one listens to the richness of her sound. It doesn’t stop her from incorporating some of the melodic structure of jazz in her music “My recent single Romance in Seoul, I was trying to make it as jazz as possible, but [to] sound really like 2016, like really recent stuff.”

Listen closely, and one can really hear the soul behind her more recent releases. Her influences speak to the heights she wants to reach with her music. “I always really wanted to do jazz or soul stuff. But I was really kind of scared to. You know jazz is like really deep. Like Ella Fitzgerald, Dinah Washington. They’re idols to me, so it was really scary.” However, with as rich a tapestry as she paints with her music, it’s hard to deny she’s at least succeeded in creating some truly nuanced music. Especially when one considers the purity in her vocal color. Of course, I had to ask if she drew vocal inspiration from her idols. She replied almost instantly, a self-deprecating chuckle behind her words, “I’m not even close to Ella.”

With as humble, one could almost say shy, as Neon Bunny really is, it had to be frightening to trek out on her own musically. As the former session keyboardist for artist The Black Skirts (Brian Cho), leaving the comfort of the background to bring yourself to the fore must be a terrifying concept. Having known a couple session vocalists, I know it’s kind of hard to step away from the warmth of a headliner’s shadow: “Black Skirts is one-man band, and I was his session musician. He’s a really good friend of mine, but I really wanted to do my own stuff, and I was really scared. But Brian was encouraging me and helping me to start as a solo artist.” Thus their joint venture with the now defunct Doggy Rich Collective: “Black Skirts signed up with HGHGRND (Tablo’s YG-housed record label). So I decided to go on my own.”