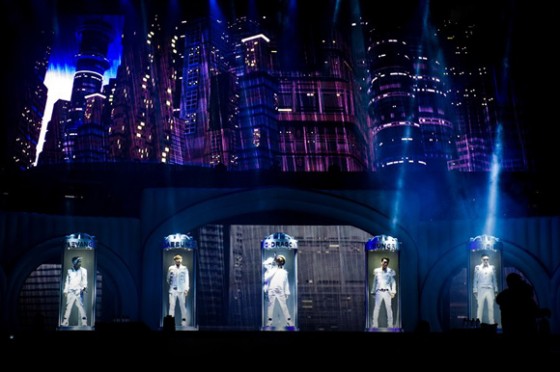 I had often heard people say that Kpop fans were obsessed with colors. I couldn’t really believe it until I heard it with my own two ears: “Now it’s time for the blue lights. THE BLUE LIGHTS!!!”

I’m not really a huge Big Bang fan, so learning that they’d be coming to town for a Kpop concert extravaganza, it was a little surreal — like walking in a never-ending stupor that didn’t actually fade until the music began. Of course, since then, I’m back in that dream — was it real? Have I just spent two and a half hours listening to Spanish-speaking fans singing quite expertly along to Korean and English?

The audience at Big Bang’s Alive Tour was predictable, obviously~ formed largely by teenage girls with their parents — some of whom stayed outside waiting for their kids all night long — young women and some guys… who were not necessarily there for their girlfriends. However, it was — disproportionately so — a night of estrogen and ovaries being thrown up in the air whenever it was TOP singing. I am getting ahead of myself, though…

It was a long week… it was even longer for those fans that camped outside a week ahead of the concert, which caused headlines for the right and wrong reasons. People who had no idea Big Bang was gonna be in town — or who the guys were — all of a sudden were asking about them. I arrived nearly four hours ahead of the concert, and the queue was enormous. I had no idea what the people who couldn’t get out of their jobs until 7 pm were going to do… and 20 minutes past the concert start and still stuck in the queue, I wondered if it was gonna be worth it-

The place wasn’t as packed as I thought it was gonna be — all the hysteria about not finding a place was unfounded because there was plenty of space, and to my surprise, Peruvian VIPs were close to angels at the venue. None were pushing around like in other pop concerts I had attended, most of them sang along to everything, responding with screams or simple English — or the random “Big Bang saranghae” — and even the ratio of floating cameras and Big Bang’s official light sticks had a nice balance to give the evening an almost true international flare. It was like a parallel universe.

The setlist seems to be as similar as the Big Bang Alive Tour set done in Nagoya, Japan [1], with a few tweaks here and there — you’re gonna have to excuse my non-fanaticism. The beginning had songs like Tonight and Fantastic Baby [MV] — which was also sung into the second half of our encore (our encore was as long as four songs, I swear [YouTube]), while the GD&TOP section included Knock Out [MV] and High High [MV], and we got a brilliant solo by G-Dragon with a nuts performance of Crayon [MV] and a short intro of One of a Kind [MV]. The visuals of the stage were insane, maybe not so much in CG, but I was about to have a seizure from all the color flashing. I really did love the giant screen at the back of the stage, which was adorned with arches that held the band above the performance stage. That alongside the light display, it was too much for people’s senses.

Starting out I had my own favorites in the group, and I don’t think the concert shifted my views on them. Daesung — who had not enough fangirls, to be honest — won me over by the end and his performance of Wings. It wasn’t one of my favorite tracks on Alive, but he sold it to me live. As far as performance and audience interaction, the guys delivered — I was most impressed with how many phrases in Spanish they learned (most people just learn the basics “hola,” “gracias,” or “muchas gracias“), especially Seungri, who blurted out the most phrases and actually got three lines of Spanish in one go. Fans loved it, and they loved it even more when TOP refused to speak Spanish because he’s just too damn shy about it… but his favorite Spanish word seems to be “bonita” or “bonito“, if you must know.

Overall, the concert seemed to be like a staple for the pop music scene in Peru — I have never, EVER been to a pop music concert at the prime of people’s careers. I know the Jonas Brothers and Justin Bieber were here at, what seemed, the top of their careers… but maybe you know what I think of them. However, to be able to see all of this with my own eyes… listen to it with my own ears. I think Korea’s pop music scene is doing good. You’re playing your cards well… I hope to see you more often.

I hope the U-Kiss fans had as much fun as the Peruvian VIPs seem to have had tonight.

And, dude! That arrangement of Haru Haru… it was, Fantastic Baby.

Note: photos have been released on Big Bang’s Facebook page.