So, how did it all start?

Kev Nish: We recorded all of our music into this old computer, and just rehearsed it until 7am and go straight to school, or work or whatever.  When we got signed, we started playing at clubs and shows, and any money that we would get, we all thought “Shall I get new shoes”, or whatever. No! Screw the shoes, screw the cars, screw the house. We put it all into our show, like buying new guitars, new beat machines, maybe probably getting some lights or different visual effects. That has always been the game, that we invest in our show which is important for us as artists.

But do you ever feel that, this is it, now I’ve had enough. Now I wanna work at a supermarket or whatever?

Phrogress: Luckily, we don’t have any other talents so…[all guys laugh]

Kev Nish: You know, that’s up to the fans. As long as the fans don’t get tired of it, then we won’t. Because they are the ones that keep you inspired. If they are down there going, “Yeah, I don’t wanna see this anymore”, then we might feel that, “Damn I might try something new.” But as long as they are there and they like the Bass, then we will be there for them.

I read somewhere on your website that you get inspired with what you have on your iPods at the moment. Can you name some artists that have inspired you the most?

Kev Nish: We can do three, which sums it up. Hmm…Beasty Boys for sure, especially when it comes to their live elements.  You know because they have three MCs and a DJ, just like us. And they are outside the box, mentality as far as visual. They are always mixing it up, flipping the genres.

Another band, OutKast, you know the way they could take a southern rap and make a cross over to pop mainstream and push that genre. They were another genre-pushing group.

And the third one?

Those are a good three, but there’s a lot more. But those three shaped many songs, many moves we made during our time. 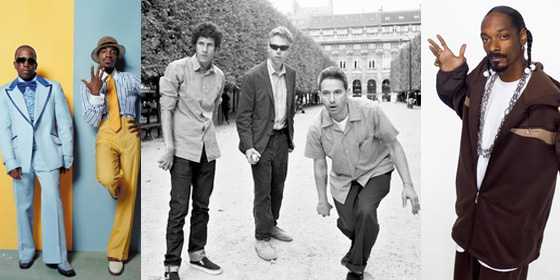