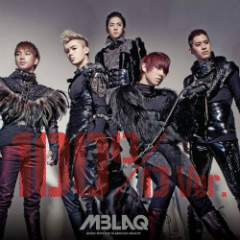 It seems like MBLAQ keeps on improving. As I mentioned earlier in my review for their mini-album Y, I heard that there was more to this Korean quintet. They clearly have the vocal talent and they do always manage to somehow stick out in the Korean pop scene.

Their previous release, MONA LISA, is one of my favorite albums from last year. I am not sure why I didn’t write a review for it. I guess I was too busy enjoying the album. MONA LISA is the album that proved to me that MBLAQ isn’t your typical Korean idol group. Where MONA LISA was a bit consistent in its sound, a bit more pop and fluff, we get a bit of a mix in sounds on 100% Ver. Something that works in showcasing MBLAQ’s versatile style.

I guess what I enjoy about this mini-album is that it starts of strong. Run and It’s War are dark, rough and hard. Then Scribble is kind of an interlude to She’s Breathtaking and Hello My Ex, two very light pop songs.

My favorite tracks are Run because it’s all fast, rough and loud, It’s War because of the impressive string arrangements as well as the anger – the lyrics are filled with lines such as “You coward, you who bothered my love. It’s war” and “Can you please shut those dirty lips, can you take back these tears of blood and sweat? Hear this clearly, I’m not ever letting you go” — and Scribble, which, according to me, is one of the better songs MBLAQ has done. It’s lovely because of the slow tempo, the accordion arrangement and the power of Mir’s rapping.

In all, a solid mini-album that is yet another great addition to MBLAQ’s discography. I have yet to have anything bad to say about MBLAQ’s music, which proves that they are really among the better Kpop acts. It also proves that their label is willing to work hard to find a sound that works. The entire album was written and produced by Chance from One Way – One Way has been showing how capable they are in the Kpop scene, as they have produced for other acts such as 2PM and Super Junior, among others. Choosing Chance and giving him free rein proved to be the right thing to do. He was able to find that perfect balance of style influences that distinguishes MBLAQ from the rest. This mini-album is still MBLAQ. We hear the same sound we have become accustomed to, but it isn’t boring.

Preview it on Xiami | Like it? Buy it on YesAsia or iTunes