What do you think about the stuff that is done digitally, like Harry Potter?
RB: I think it’s great when it is called for, and I think the Voldemort guy, that kind of thing that they did, that’s something you can’t do with makeup. You cannot take a guy’s nose away like that. I think that’s excellent use of the technology. It’s just when they use it for something that we can do on the day and we’re there, it’s like why? It’s just because it is the newest thing. 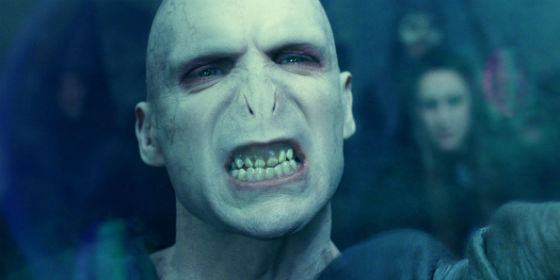 Makeup started out with spirit gum, nose putty, cotton and collodion, then they used gelatin for awhile, rubber and foam rubber. All of these things were met with resistance. Unfortunately, Jack Pierce, who did The Wolf Man and all that stuff, didn’t like the rubber stuff, even though he used a rubber nose on Wolf Man, and ended up using a rubber head on Frankenstein’s Monster.

He kind of thought that it wasn’t real makeup. That’s kind of why he got kicked out of Universal because he was taking six hours to do makeup that a foam rubber piece would take three. So I took note of that and I wanted to make sure that I stayed current. I’m always trying to find a better way to do things. I got a lot of resistance from makeup artists when I started doing, actually when I won for An American Werewolf. They would say, “Half that stuff wasn’t even really makeup!” and it’s a whole crazy thing. I do think if it’s something we can’t do, then it’s another tool in our bag of tricks.

We couldn’t make his nose disappear like that. So it’s a great thing to have.