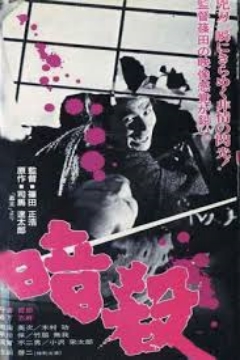 Alongside such figures as Ôshima Nagisa, Yoshida Yoshishige, Imamura Shôhei, Masumura Yasuzô, Teshigahara Hiroshi, Hani Susumu and Kurahara Koreyoshi, Shinoda Masahiro was one of the key members of the so-called Japanese new wave, whose wide-ranging scope also encompassed the likes of Suzuki Seijun and Kaneto Shindô. More specifically, he was among the triumvirate—also including Ôshima and Yoshida—that formed the new wave at Shochiku.

Although he is primarily known in the West for his 1969 effort, Double Suicide (心中天網島), a cine-theatrical experiment which realized a bunraku [1] puppet play, Shinoda was a prolific filmmaker who made more than thirty films before retiring from the arena in 2003. 1964 was an important year for this one-time Ozu assistant, as two of his finest and most acclaimed films saw the light of day: Pale Flower (乾いた花), a radical and broodingly terse—not to mention visually and aurally stunning, which is true of majority of Shinoda’s work—yakuza tale, and Assassination (Ansatsu), Shinoda’s first, and rather modernist, foray into period films.

Taking its cues from the oft-depicted turbulent sociopolitical period of Late Tokugawa Shogunate (1853-1867) [1], which initiated with Colonel Perry-commanded four American warships positioning themselves at a key Japanese port and thus terminating the country’s centuries-old trade impasse and more and edging it to the brink of civil war, Assassination begins in the third year of Bunkyu [1], or 1863. In the opening moments, we witness a murderer being pardoned as per the Premier’s orders. The man turns out to be Kiyokawa Hachiro (the ubiquitous Tanba Tetsuro), an exceptional ronin [1] who was once known to be the Emperor’s supporter.

Shogunate’s most staunch opposition at the time was provided by the Imperial allies, demanding expulsion of foreign forces from their Divine Land, forces the Shogunate feared. Nevertheless, he is granted the task of forming a Free Samurai Army against his former Emperor Worshippers (“poison kills poison,” Shogunate Lord Matsudaira once slithers). But also fully expecting Kiyokawa’s betrayal, which mutates into an intricate political machination, an assassin is unleashed on his trail, who, along with Kiyokawa’s devotees, becomes the catalyst for revealing our protagonist’s true character, an ambitious task for sure.

Indeed, Kiyokawa is not one of those run-of-the-mill righteous heroes who patrol the mean streets in so many jidaigeki [1] and chanbara [1] yarns. The fact that he is also based on an actual person perhaps afforded famed author Shiba Ryôtarô and screenwriter Yamada Nobuo an opportunity to capture the morally indeterminate milieu and contextualize its effects on Kiyokawa’s emotional and psychological state. He constantly feels the need to prove himself as an equal to those who regulate him, as he has paid his dues at the best Samurai schools and is considered a highly respected opponent for anyone.

In one important sequence that unfolds at a brothel, Kiyokawa, disgruntled by the lack of change even after the Tenpo Reformation [1], which was supposed to assist ordinary ronins like himself, forcibly takes the innocence of a recently sold young woman — played by the beautiful Iwashita Shima, Shinoda’s wife, who went on to appear in most of his subsequent films. — under the impression that she refused to serve him due to his class. But after recognizing her situation, he buys her out and makes her his honorable servant, an immense gesture repaid by the woman with her life.

Due to the fact that Shinoda readily employs elliptical flashbacks and voice-overs that cause multiple shifts in the the point-of-view, Assassination admittedly is complex, and may require at least a second viewing to be comprehended and appreciated properly. That said, unlike Shinoda’s subsequent period effort, Samurai Spy (異聞猿飛佐助), it is not complicated or hard to follow. The latter’s highly-stylized action choreography, which at times veered toward the comical, is also largely absent, and is replaced by quick and bloody confrontations—no abstractions here. In both films, however, the protagonists are kept at a certain emotional distance, perhaps part of the reason why author Audie Bock once used the term “icy aestheticism” in relation to the director’s approach, but it is also what makes them such fascinating figures.

The narrative and stylistic hallmarks of the sixties new waves—hand-held camera work (which truly makes its mark during the film’s final moments), freeze-frames, existential themes—are applied with aplomb. Part of the credit certainly goes to Kosugi Masao, Shinoda’s favorite early cinematographer—his expressionist use of light and shadow within the magnificent ‘scope compositions is noteworthy. And the appropriately austere music is courtesy of the great Takemitsu Tôru, who provided scores for a number of key films of the time-period. Shinoda once stated in an interview that “I would like to take hold of the past and make it stand still so I can examine it from different angles.” With Assassination, he has gone a long way toward actualizing his goal.